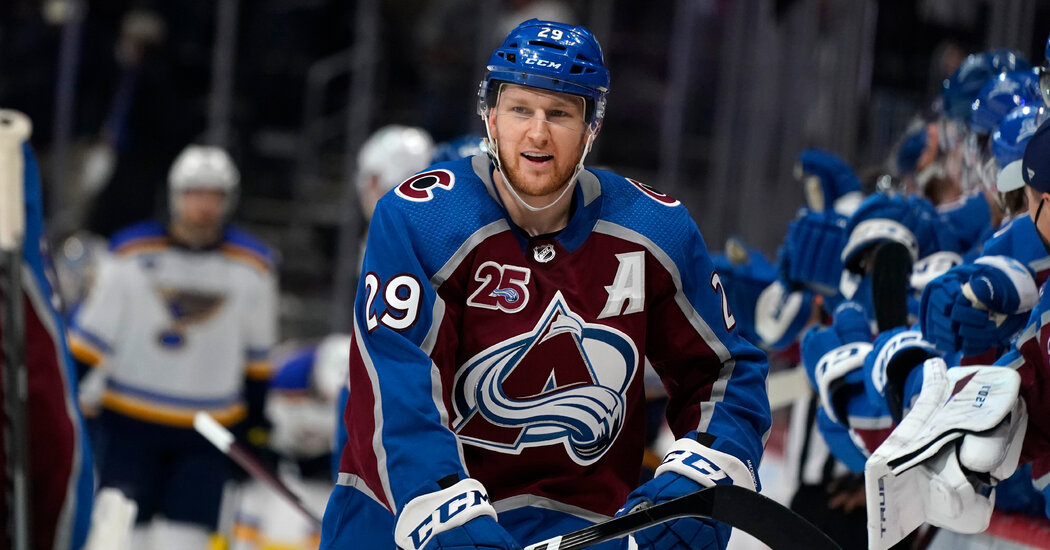 The N.H.L. is looking forward to easing back into normalcy on the ice and in the stands. After two chaotic years (and two titles for the Tampa Bay Lightning), the league will be hoping to crown a champion next spring without unwelcome pandemic-related drama.

When does the season start?

There is a doubleheader on Tuesday, available on ESPN in the United States and Sportsnet in Canada. The Pittsburgh Penguins visit the Lightning at 7:30 p.m. Eastern time, and the Seattle Kraken travel to Las Vegas to meet the Golden Knights in the nightcap at 10 p.m. in the expansion franchise’s regular-season debut.

There are five more games on Wednesday, and every team will be in action by Saturday.

The Seattle Kraken join the league, playing in a remodeled version of the venue formerly known as KeyArena, now named Climate Pledge Arena.

While Seattle has never had a team in the N.H.L. before, it has lifted a Stanley Cup: The Seattle Metropolitans of the Pacific Coast Hockey Association won it in 1917, when the Cup was still open to teams from different leagues.

The Kraken seem to have assembled a decent roster: Players include Mark Giordano, the longtime Calgary Flames defenseman who won the Norris Trophy in 2019 as the league’s top defenseman; Right wing Jordan Eberle, who played with the Edmonton Oilers and the Islanders; and goalie Philipp Grubauer, who most recently played with the Avalanche. Center Matty Beniers, whom the Kraken took No. 2 overall in the draft, will stay at the University of Michigan this season.

The immediate historical precedent is promising. The last expansion team, the Golden Knights, made the Stanley Cup final in their first year and are four-for-four in qualifying for the playoffs.

After a five-game road trip, Seattle will have its home opener on Oct. 23 against the Vancouver Canucks, who because of their geographic proximity are being hyped as the team’s major rival.

After 10 years on NBC’s networks, the league’s American TV deal shifts to ESPN and Turner Sports. National games will be on the NHL Network as well. The CBC and TSN will show games in Canada.

Teams will be filling the house again after a season with few fans. For most of the 2020-21 season, teams played variously with their arenas at 10 to 50 percent capacity. In Canada, most games had no fans.

The league also returns to its conventional October-to-April regular season schedule after the 2020-21 season was held from January to May, and the 2019-20 campaign was halted in March because of the pandemic and the playoffs were held five months later. The league plans to play its full complement of 82 games for the first time since 2018-19. The playoffs will be held from April into June in the conventional format: 16 teams, with every series a best-of-seven.

Last season, because of strict cross-border travel restrictions, Canadian teams were all placed in the same division, and every team played only against divisional opponents. Intradivisional games are back, and so are U.S.-Canada matchups, starting with the Winnipeg Jets at the Anaheim Ducks on Wednesday.

There will be outdoor games in Minnesota in January, Nashville in February and Hamilton, Ontario, in March. After skipping a season, the All-Star Game is expected to return, in Las Vegas.

Where do things stand with Covid?

The league said it expected all but a handful of players to be vaccinated by opening night. The high compliance rate comes in part because unvaccinated players will be limited mostly to the hotel and arena when on the road.

The Oilers have been affected particularly acutely by Covid. Forward Josh Archibald, who has been outspoken against the vaccine, has been found to have a serious heart condition that doctors suspect was caused by the virus. Duncan Keith, the newly acquired veteran defenseman, did get vaccinated, but expressed frustration that he felt pressured to do so.

Are the players going to the Olympics?

Yes. After missing the 2018 Games in Pyeongchang, South Korea, when a deal could not be struck, N.H.L. players will return to the Olympics in Beijing in 2022. The league will shut down for three weeks in February to allow its stars to play. It’s good news for the players, who almost unanimously want to participate, but may not be for the owners, who feel the league does not adequately benefit from the Games, either financially or in publicity.

Who are the big stars?

The Oilers’ Connor McDavid won his second Hart Trophy as the league’s most valuable player last season. He also led the league in assists and points, scoring 105 points in 56 games, but was edged by Auston Matthews of the Maple Leafs in goals with 41. The Oilers also have the 2020 Hart winner, Leon Draisaitl, giving them a fearsome one-two punch, and fans in Edmonton are getting antsy for the team to finally go on a deep playoff run.

It doesn’t seem that long ago that Sidney Crosby was a young phenom dazzling the league. Now he’s 34, and the Penguins have lost in the first round of the playoffs in two of the past three years and fell in the qualifying round in the modified 2020 format. Closing in on 500 career goals, he will be looking for a return to the excellent back-to-back Cup years of 2016 and 2017.

Drama on and off the ice

Although Tampa Bay is the two-time defending champion, the oddsmakers see the Colorado Avalanche as the favorite, with 5-1 odds to lift the Cup for their first time since 2001. Tampa Bay and Vegas are the closest challengers. (Colorado tied Vegas for the most points last season and won the Presidents’ Trophy.) A finalist for the Hart in three of the last four seasons, Avalanche center Nathan MacKinnon has never made it past the second round of the playoffs.

The Buffalo Sabres are unlikely to sparkle: After 11 regulation wins in 56 games last season, they are considered the least likely team to win the Cup. After six seasons of stellar play with a poor team around him, Jack Eichel may finally have reached the end of the road with the Sabres, and the team is seeking to trade him.

Evander Kane is in the middle of a lucrative seven-year contract with the San Jose Sharks that he signed in 2018, but finds himself amid chaos on multiple fronts. The league said an investigation cleared him of accusations of betting on his own games, but multiple reports have said he is also being investigated for violations of Covid rules. He also faces sexual and domestic abuse allegations from his estranged wife, Anna. There is a cloud of uncertainty over his future in San Jose, or anywhere in the league.