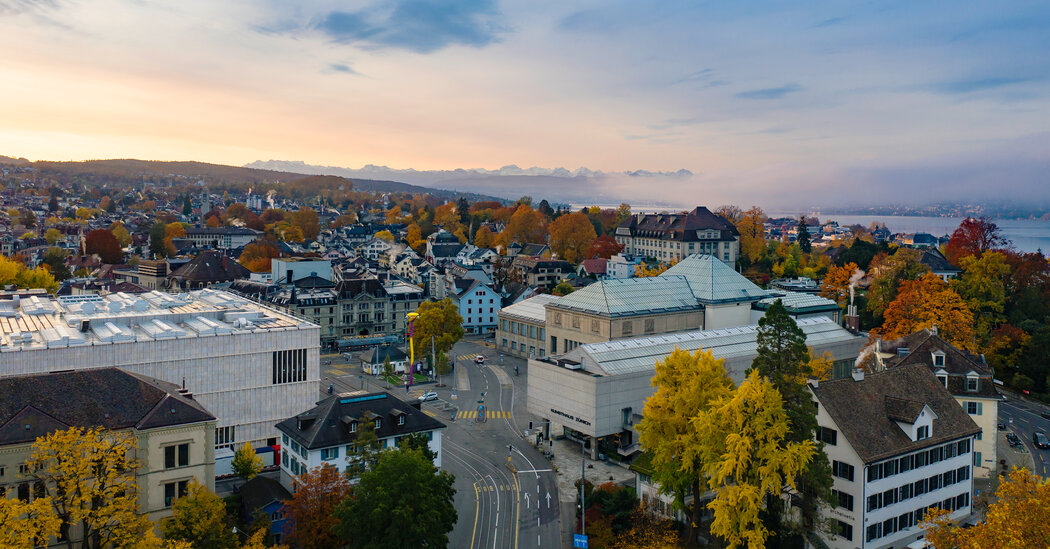 ZURICH — With the opening of an imposing extension on Saturday, the Zurich Kunsthaus became Switzerland’s largest art museum. The vast new cube designed by the British architect David Chipperfield, opposite the original building on a central square, more than doubles the museum’s exhibition space.

An airy atrium leads to a newly installed garden, and marble staircases take visitors to spacious galleries bathed in filtered daylight. On the second floor, they can admire masterpieces by Monet, Cézanne, Gauguin, van Gogh and Degas.

These works once belonged to Emil Georg Bührle, a Swiss industrialist who died in 1956 but whose dark legacy haunted the opening of the new $220-million extension. Although it has long been known that Bührle made his fortune by selling arms to Nazi Germany, and that he bought art that was looted by the regime, new revelations keep emerging.

In August, a Swiss magazine, Beobachter, reported that Bührle employed hundreds of girls and young women from troubled backgrounds in slave-labor-like conditions in Switzerland as late as the 1950s. This month, the magazine said that in 1941, Bührle snapped up two Swiss spinning mills at bargain prices after their previous owners — Jews whose assets in Germany had been “aryanized” in forced sales — had fled to Argentina.

And two weeks before the new extension’s opening, a book about the Kunsthaus by the historian Erich Keller was published. Its German title translates as “The Contaminated Museum.”

“It’s difficult,” said Christoph Becker, the director of the Kunsthaus, after fielding questions from reporters at a news conference on Wednesday. “But the debate is a good thing.”

The connections between Bührle and the Kunsthaus date back to 1940, when Bührle became a member of its board of trustees. He funded an earlier extension, completed in 1958. A bust and plaque at the entrance of an exhibition hall named after him honor his contribution.

Now, 203 artworks belonging to the Foundation E. G. Bührle Collection, an organization set up by the industrialist’s family after his death, have entered the Kunsthaus collection on a 20-year loan. About 170 are on show in the new extension.

In a recent interview, Keller said that the Kunsthaus should never have accepted the foundation’s offer to put those works on display. “It’s a collection built with money from arms sales, from slave labor, from child labor,” he said.

Born in 1890 in Germany, Bührle served in the country’s army during World War I, then started working for a tool manufacturer in the city of Magdeburg. He moved to Zurich in 1924 to run a similar operation, where he patented and manufactured antiaircraft cannons for export around the world.

During World War II, his company produced weapons for both the Allies and Nazi Germany, and Bührle became the richest man in Switzerland. Though the Allies put his company on a blacklist after the war, the boycott was lifted in 1946 and the business continued to expand.

When Impressionist masterpieces from the collection were displayed at the National Gallery in Washington in 1990, the critic Michael Kimmelmanwrote in The New York Times that the museum “should never have undertaken” the exhibition. “The point is not that these works shouldn’t be seen, but that they should be seen in a meaningful context,” he wrote.

In one of a dozen rooms devoted to the Bührle collection in the Kunsthaus’s new extension, a display addresses the industrialist’s career and the provenance of his art with wall text, documents and photos. Before the show opened at the Kunsthaus, officials from the city and region of Zurich commissioned a study from Zurich University, published last year, examining Bührle’s biography and the origins of the fortune he used to buy art. The museum’s board of trustees includes representatives of the city and regional governments.

Yet responsibility for research into the provenance of individual artworks was out of that study’s scope. The Bührle Foundation itself began conducting provenance research in 2002, and the results are published on the foundation’s website, though there is no detailed ownership history on the labels next to the paintings on display in the Kunsthaus.

Lukas Gloor, the director of the Bührle Foundation, said in an interview that “today, we can be sure that there is no looted art, in the strictest sense, in the collection,” but added, “We do not rule out the possibility that new information could come to light.”

In his book, Keller voices misgivings about the foundation’s research, calling the provenance reports on its website “a filter which withholds decisive facts.”

He cites an 1879 Cézanne work, “Paysage,” as an example. The foundation’s website doesn’t mention that its prewar owners, Martha and Berthold Nothmann, were Jewish; it says the couple “left Germany in 1939,” instead of spelling out that they fled persecution.

Monet’s 1880 “Poppy Field Near Vétheuil” is another contested work. Bührle bought it in 1941 at a Swiss gallery for less than half its market value, according to a 2012 report by the historian Thomas Buomberger. It had been offered for sale by Hans Erich Emden, the son of a German Jewish department-store mogul whose assets in Germany were expropriated by the Nazis after he moved to Switzerland.

The foundation rejected a claim from Emden’s heirs, arguing that the sale was not a result of Nazi persecution. Gloor said that cases in which German Jews sold assets while exiled in Switzerland should not necessarily be considered sales under duress.

“Switzerland was not German-occupied; there was no persecution in Switzerland,” he said. “People were free to sell, or not sell.”

With the collection’s move to the Kunsthaus, responsibility for provenance research now rests with the museum, though any restitution decision would fall to the foundation as the owner, Gloor said. He added that researchers had now been granted unrestricted access to the foundation’s archives, which are being kept at the museum.

Gloor said he hoped independent scholars would scrutinize the foundation’s work. “I am happy for colleagues to ask questions or dig deeper,” he said.

Corinne Mauch, Zurich’s mayor, said in an interview that she hoped the Kunsthaus’s extension would strengthen Zurich’s appeal as a cultural destination. “Zurich has always been perceived as the finance and banking center,” she said. “It has been gaining profile as a cultural center in recent years. And this building is a milestone.”

She said she stood behind the biographical research conducted by the university and the provenance research by the Bührle Foundation, which she described as a Swiss pioneer in researching the ownership history of its artworks.

“It is important to show the paintings, but it is important that we present them in an exemplary way, which means confronting the problematic aspects,” she said. “I don’t think this debate will end just because we have opened the extension.”