A Sailing Season Full of Drama 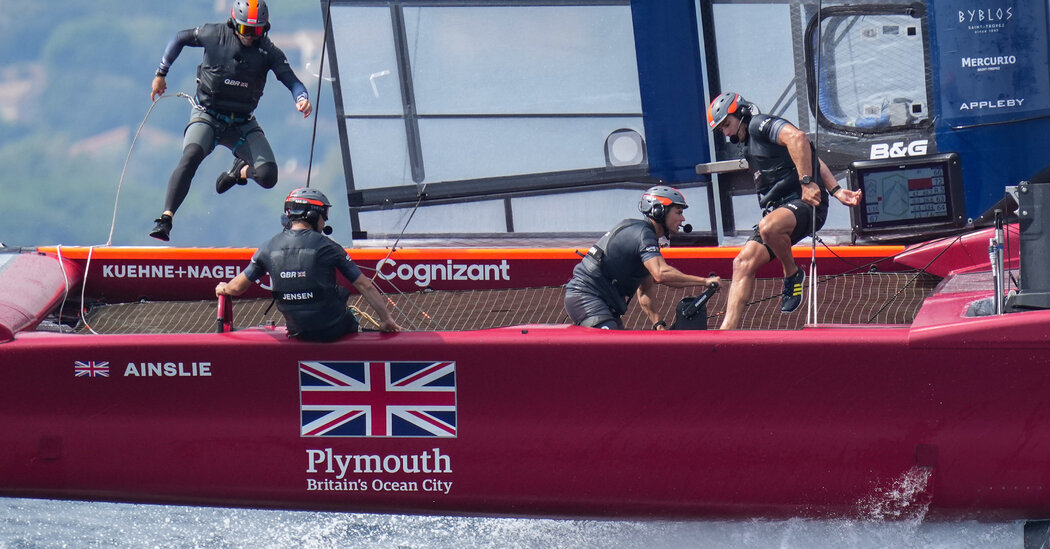 When Larry Ellison, the founder of Oracle, and the five-time America’s Cup winner Russell Coutts started SailGP in 2018, they wanted to bring the excitement of Formula 1 to sailing. They decided the boats would be based on the 2017 America’s Cup boats — 50-foot foiling catamarans capable of record speeds.

“You’ve got the best sailors in the world on these boats, and they’re not easy boats to sail,” said Phil Robertson, the driver for Spain’s team. “It’s very high tech — more of a machine than a yacht. But it’s one of the coolest things to happen to yacht racing.”

With the competition in its second season, eight teams are fighting over eight events for the $1 million prize. The series resumes in Spain on Saturday and Sunday. Here are this season’s top highlights.

The final day of racing at the Bermuda Sail Grand Prix in April, the first event of the year, had extreme conditions with wind speeds above 20 knots. Japan collided with the United States boat at a closing speed of 70 m.p.h. Japan’s bow came down on the U.S. boat, hitting a mast shroud that nearly sliced it off. But there was more damage than that.

“I don’t think we have a rudder,” the U.S. driver Jimmy Spithill is heard saying over the radio. The crash had damaged the power to the U.S. wing. The boat tried to finish the race, but lost steering function and capsized. Later at the docks, with both boats damaged and the teams penalized, Japan’s driver Nathan Outteridge apologized to Spithill

“I had a good chat with Jimmy,” he said later. “We’re obviously in the wrong. But it’s racing, at the end of the day. We are out there pushing hard on very fast boats, and these things are going to happen.”

After a tough run in Bermuda, the U.S. team mounted a comeback in Italy in June in an event that had teams race with only three crew onboard — instead of five — in the light winds. The United States was leading Japan and Spain, sailing more than 6 m.p.h. faster, in the final race on the penultimate leg. With the finish line in sight, the United States struck an underwater object while doing 30 m.p.h., snapping the rudder and causing the boat to leap into the air.

“Extremely tough way to end it,” Spithill said. “We were really sailing a perfect race, and all we had to do was round the mark and head to the finish. Now I know how a Formula 1 driver feels when you have two corners to go and you have an engine fail.”

In Britain in July, Spain drew SailGP’s first Black Flag, a disqualification penalty for prematurely crossing the start line while putting another team at high risk of serious collision or capsize. On the first day of racing, Spain’s driver, Robertson, made what other sailors said was an aggressive move at the start of the third qualifying race. With seconds to go before the start of the race, he cut into the starting order, aiming directly at the U.S. boat before steering into the racecourse. The United States had to make a last-minute maneuver to avoid a crash.

It was the third time this season Robertson had tried the risky move to mixed results. Officials immediately gave Spain a Black Flag and disqualified it from the race. Afterward, Craig Mitchell, SailGP’s chief umpire, explained the risk-rewards of the move.

“It’s a spectacular move when it goes well,” he said.” But it’s also a very high-tariff maneuver. And when you get it wrong, there can be quite catastrophic consequences. You don’t get here unless you’re a winner. And winners take risks. This time it just didn’t pay off.”

Later, in a phone interview, Robertson said he still stood behind his move. “We thought we could make it,” he said. “I made the call and we went for it. We knew it would be a bit risky. The other option — crashing — was a lot worse. We were pretty surprised by the Black Flag. I still think it was a bad call. We caught that one on the chin.”

“It was a full-on moment for the team in big conditions, a real team effort just to keep the boat flying through the turn, so it was almost a surprise to find out afterwards that we had hit our fastest speed and the SailGP record,” Ainslie said in an email. “It was one of those days where you’re just glad to get the boat back to the dock in reasonable shape. If we had slightly flatter conditions, it could have been faster. The way the F50 is going, with it’s constant innovations, it won’t be too long until one of the teams reaches 62 m.p.h.”

SailGP officials said the top-end speed of the F50 has yet to be reached, and it was expected to increase, potentially being broken next March in San Francisco, which has the strongest winds on the circuit.

A broken bone in Denmark

Bad luck followed the U.S. team to Denmark in August. During a practice race in high winds, the team lost control of their F50, tossing Spithill and the wing trimmer Paul Campbell-James out of the cockpit. The team avoided capsizing, and Spithill was uninjured, but Campbell-James broke his fibula when he got tossed across the boat as it went airborne. He did not tell his team until it finished the practice race, when he requested a medic.

“I guess it was adrenaline, “Campbell-James said in an email. “To be honest, it didn’t really hurt. I could feel something moving in my leg, which felt a bit weird, but I was hoping it would just go away. Then on the third time running across the boat — actually it was more like hopping by then — I knew it was fairly major, so I tapped out.”