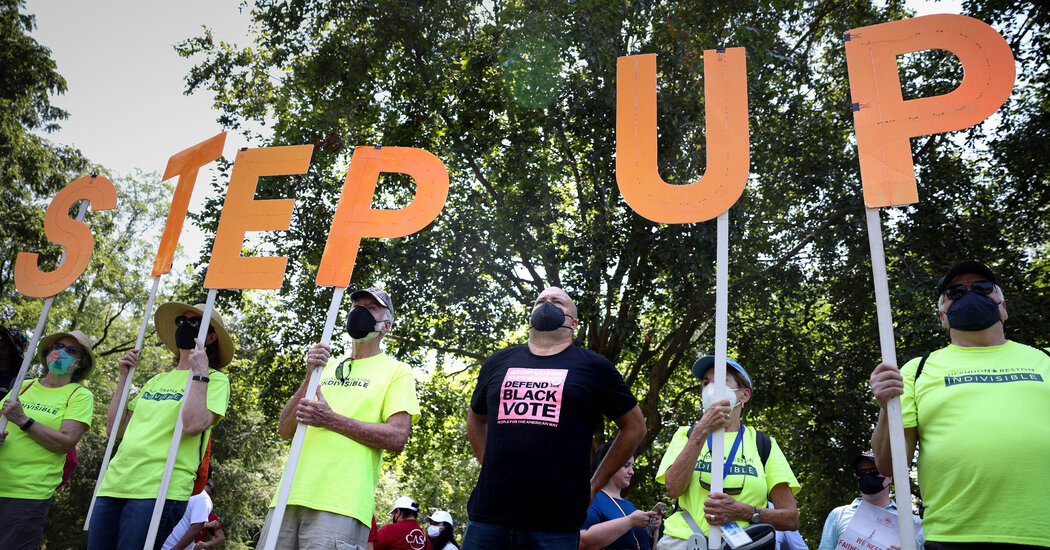 The as-yet-unanswerable question is whether that slide is a momentary dip — a fluke of a tough run of headlines — or a warning sign of even deeper dissatisfaction among Democratic-leaning voters.

A large number of voters — women, young people and those who are Black or Latino — have all soured on Mr. Biden’s performance, according to polls conducted since the withdrawal of American troops from Afghanistan, even while Mr. Biden has retained more of his support among men, college-educated white voters and older voters.

The shifts could be temporary. Perhaps the enactment of the president’s stalled legislative initiatives in Congress would be enough for the president to renew his reputation with Democratic-leaning voters. But for now, the differences in attitudes about Mr. Biden between men and women, young and old, Hispanic and non-Hispanic and perhaps even white and Black have grown unusually small. The pattern defies the decades-long tendency for Democrats to fare better among women than men, and among the young than the old.

There are few clues to help analysts understand these striking shifts in Mr. Biden’s ratings among reliably Democratic constituencies. But the shift can be interpreted in two ways, each with very different political consequences heading into the midterm election next year.

The best case for Democrats is that this is nothing more than an unusual response to an unusually unfavorable news environment, in which general dissatisfaction with Mr. Biden over the chaos in Afghanistan and the surging Delta variant of the coronavirus temporarily spilled across demographic fault lines.

But Mr. Biden’s weakness could also be interpreted as a continuation of electoral trends that surprised and disappointed Democrats in November. Mr. Biden fared unexpectedly poorly last year among many of the same groups he is struggling with now. It raises the more alarming possibility for Democrats that recent events have revealed a broader problem — they are losing support among voting groups they generally take for granted.

Mr. Biden’s ratings have fallen more among women than any other demographic group. Forty-eight percent of women approve of Mr. Biden’s performance in polls conducted since the fall of Kabul, down from 57 percent in earlier surveys by the same national pollsters.

The president has retained more of his support among men. His rating has dipped only slightly, to 42 percent from 45 percent. While women are still likelier to approve of Mr. Biden than men, the gender gap — the difference in political preference between women and men — has been cut in half, to just six points today from 12 points in July.

The polls do not offer many clues as to why. Perhaps the fate of Afghan women weighed more heavily on American women than men. Maybe the challenges of sending children back to class alienated mothers at the start of the school year. Even the Supreme Court’s decision on abortion in Texas could be contributing to a sense among Democratic-leaning women that America is off course, inadvertently hurting Mr. Biden.

For Democrats, the absence of a clear explanation could be a good sign. They can hope that voters are momentarily evaluating Mr. Biden based on perceptions of his competence, rather than on ideological grounds. If so, the gender gap — and Mr. Biden’s ratings — might return to normal if the national political environment becomes more favorable to him.

For nearly 20 years, Democrats have fared better among younger voters than older voters. That pattern continued in the 2020 presidential election, when Mr. Biden won around 60 percent of voters under 35, but only around 48 percent of voters 65 and older — a gap of about 12 points.

That cannot be said for Mr. Biden today.

The president’s ratings have fallen to around 45 percent among 18- to 34-year-olds, while his rating holds at around 48 percent among seniors, entirely closing and even slightly reversing the generation gap evident in recent elections.

It is possible the coronavirus pandemic plays a role in Mr. Biden’s challenge, as young voters bear much of the burden of virus-related restrictions, do not face as many health risks as older voters and are relatively unlikely to be vaccinated.

A fall among Black voters

If all of the polls are averaged together, Mr. Biden has not necessarily lost that much more ground among Black or Hispanic voters than white voters. But there is real, if inconclusive, evidence of a larger decline in his standing, especially among African Americans.

Polls from the Pew Research Center, Quinnipiac University and Morning Consult all found Mr. Biden’s approval rating slipping into the low 70s or 60s among Black voters, a weak performance for any Democrat.

The Pew Research and Morning Consult surveys warrant particular attention, since they have large numbers of Black respondents. The difference between white and Black voters has been nearly cut in half in those polls, to around 30 points from the typical 50-point gap in recent presidential races.

But the polls have not been consistent in showing a steep decline in Mr. Biden’s support among Black voters, with some national surveys showing Mr. Biden with a much higher and more typical approval rating.

The polls were largely conducted before bipartisan talks to reform policing faltered, and outrage erupted over the treatment of Haitian refugees at the U.S.-Mexico border.

While most major demographic divides have eroded recently, one has continued to widen: the education gap among white voters.

Mr. Biden’s support has held up among white college graduates, according to the recent polls, while his standing among white voters without a degree has dropped to 30 percent, down from 37 percent in polls taken in June and July.

Even if Mr. Biden could rejuvenate his support among traditional Democratic constituencies, weakness among white voters without a degree would still be a serious challenge for Democrats heading into the midterm election next year, when the president’s party usually suffers a drubbing.

The latest polls do not do much to reassure Democrats that they are poised to defy that trend. In the history of modern polling, Mr. Biden’s ratings have sunk lower than the ratings for all but two presidents at similar points in their terms — Gerald Ford and Donald Trump.