Cactus Is the New Coconut, and These Founders Are Going All In: ‘We Decided to Drop Our Lab Coats, Put on Our Cactus Suits and Chase the American Dream’

About 15 years ago, coconut water hit the U.S. market and exploded in popularity with its purported health benefits. Though the craze has slowed somewhat in recent years, the drink still takes up its fair share of space on shelves nationwide. But many who’ve given the beverage a chance share a less-than-glowing take: It doesn’t really taste good. Would most people drink coconut water if it weren’t a lower-calorie, less sugary alternative to sports drinks and sodas? Probably not. 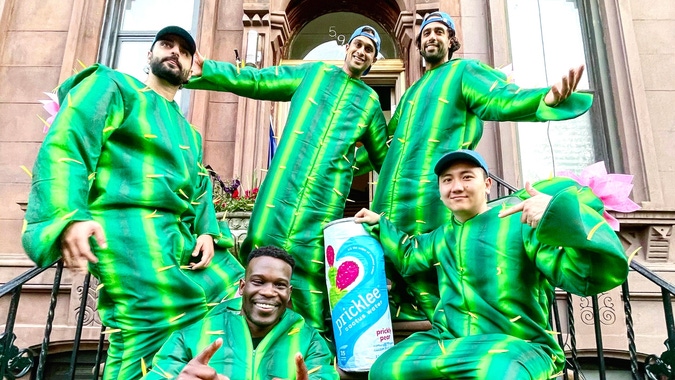 Five Boston-based, first-generation American friends in their twenties and thirties were also united in their dislike of coconut water, and they wanted to do something about it. Last year, Kun Yang (CEO), Mohammed Hassoun (COO), Jaanai Babb (CMO), Sarwang Shah (CSO) and Aakash Dheri (CFO) were all working as pharmacists when they decided to bring a healthier, tastier beverage to market: Pricklee Cactus Water. As the brand’s name suggests, the secret lies in a delicious fruit many U.S. consumers may be unfamiliar with: the prickly pear.