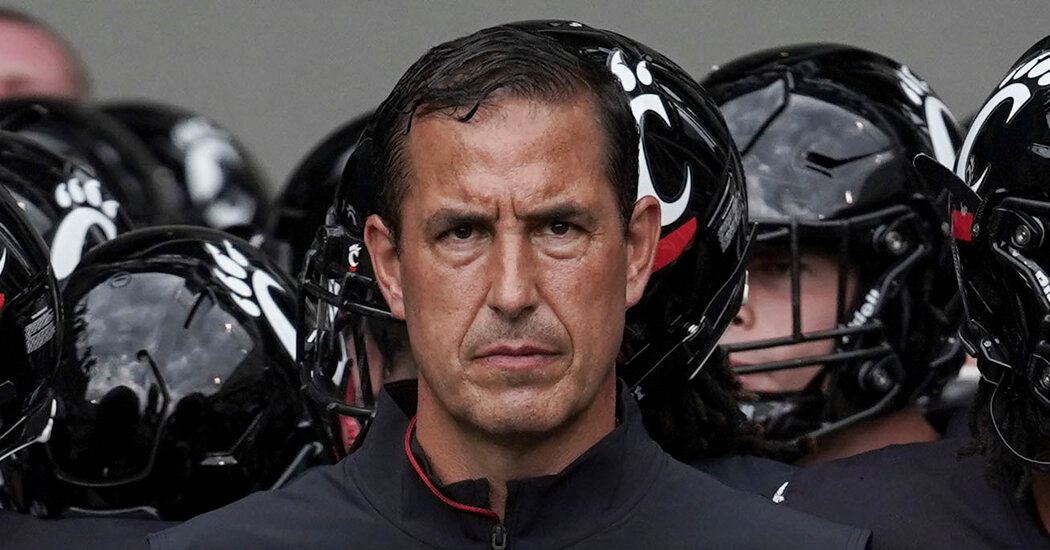 For No. 7 Cincinnati, history suggests that its route to the College Football Playoff looks like this, and only this: Beat No. 9 Notre Dame on Saturday, then win the last eight games of the regular season, then win an American Athletic Conference title.

Fail at any of those things, and the dream is finished. Pull it all off, make it to 13-0, and maybe the playoff selection committee will invite a Group of 5 team into the postseason’s premier games for the first time.

Of course, an undefeated record just gets the Bearcats into the conversation. Cincinnati played a perfect regular season in 2020 and never moved higher than seventh in the playoff rankings. By the time the committee released its final picks for the four-team tournament, Coach Luke Fickell’s Bearcats were No. 8, behind five teams with losses.

Fickell spent 16 years coaching at Ohio State, where he played nose guard in the 1990s and led the Buckeyes for a season between the tenures of the title-winning coaches Jim Tressel and Urban Meyer. Now in his fifth season at Cincinnati, which is 3-0 after beating Indiana on Sept. 18, Fickell spoke this week about the playoff, his program and a game that will be among the most important in the history of a school that has been playing football since 1885.

No. 7 Cincinnati plays No. 9 Notre Dame at 2:30 p.m. Eastern on Saturday, with the game televised on NBC. This interview has been condensed and edited for clarity.

What are the lessons for this week after you beat Indiana at their noisy stadium?

Be who we are. And that means if we need to huddle, we can huddle. But I think to change how we go about the process of what we do — I mean, we go on silent counts, we go on a hand, we go on a clap — all of those things we do, we tried to change because of the noise, and I think it affected us greater than even the noise did.

So it’s a little bit more of, “Hey, let’s just make sure we do what we do and not try to change it.”

Notre Dame barely beat Florida State, which is still winless, and had a tough game with Toledo. But they beat Purdue and ran up the score on Wisconsin late. What’s keeping you up at night this week?

The quarterback Desmond Ridder stayed at Cincinnati for another season. How is he different from a year ago?

He’s just much more mature in understanding that he’s got to let the game come to him. He’s much more adept at not trying to be perfect; in his sophomore and junior year, he was trying to be and thinking he could be. But I think in his growth, he has really kind of recognized that you’re not going to be perfect, that if you’re supposed to take a shot and it’s not there, then take what it is you have a chance to do.

That’s where he’s shown his growth as much as anything. Not that he panicked before because he’s always been a cool competitor, but he’s really been able to handle even the slower starts that we’ve had and keep everybody kind of grounded with confidence.

Cincinnati has one of the American Athletic Conference’s best defenses. Now that you’ve been a head coach and in the American for a while, have any of your big ideas about defense evolved?

I’ve evolved more probably in the first two or three years here than I really ever did even at Ohio State because you realize what you’ve got and how you need to do some things different in order to create things.

You get kind of set in your ways and the things you really believe in, and all of a sudden you recognize that’s not going to work. You don’t change what you believe in, but find some ways to do some things different to make sure you’re giving your kids the best chance.

What’s the biggest difference in your approach?

We play much more of a three-man front as opposed to a four-man front. We’ve always kind of been stop-the-run and build everything from there. One of the things that was a challenge to me in my last few years at Ohio State was how do you work from the back to the front end. That was something I had never really thought that much about and had to combine those two things as we started to evolve here.

You were at Ohio State when Brian Kelly, now Notre Dame’s coach, was running Cincinnati. How has Cincinnati football changed since?

I was arrogant enough to not really know what was going on down here. And I think that’s one of those things as a younger coach that happens to you. I would admit I was arrogant enough to not recognize and realize what he was doing here — obviously, I did when they were No. 2 or 3 in the country and undefeated and things like that — but still I didn’t recognize things I didn’t understand and know. I think that’s where all of your experiences really help shape you not just as a coach but as a person, too.

Coaches like to say that their teams control their own destinies. Given how the playoff committee has treated schools like Cincinnati, can you make that argument in your locker room?

You control your own destiny. I mean, your destiny might not be going to the playoff if you win every game. But you control it.

I’m truly one who believes it’s not just the teams of our league or the teams of the non-, so to speak, Power 5 group. I think it’s everybody: Had Texas A&M been maybe right at that spot last year, they weren’t going to jump Notre Dame or Alabama or Clemson or Ohio State, just because of the sheer followings and what it is that those guys have been. When you’re a top-five program, there are a lot of benefits that are afforded to you.

I don’t worry about it. But in our minds, you do control your own destiny.

Mike Aresco, the American’s commissioner, said no one should “underestimate the branding” power of Power 5 conferences. Cincinnati is getting ready to jump to the Big 12, so do you agree with that assessment?

Now, can Georgia get in with one loss? We’ve seen it. Alabama? Darn right. Ohio State? We’ve already seen it. It’s not like that for everybody, but it is what it is. I think those teams do get the benefit because of what they’ve done. And I’m not saying they don’t deserve it, because they do.

You all nearly beat Georgia in the Peach Bowl last season. Winning this weekend would be huge for your program. Have you thought about what a loss would mean?

No one as a competitor thinks about losses, but you just continue to say, “Hey, we set a standard when we walked in the door here when we were terrible that, no matter what, our one goal was to play for championships.” We always want to put ourselves by the end of the year to be in that position to play for a championship, and the goal has never changed, even because of the season we had last year or the year before.

Have you let yourself imagine winning on Saturday?

No. I’m not a nostalgia guy. I don’t look back, I don’t look forward, I pretty much do as much as I possibly can in the moment. I’m not sure that’s the best way to live or even to relax, but it was kind of the way I was brought up.