Eric Adams Has $7.7 Million to Spend, As Donations From Wealthy Pour In 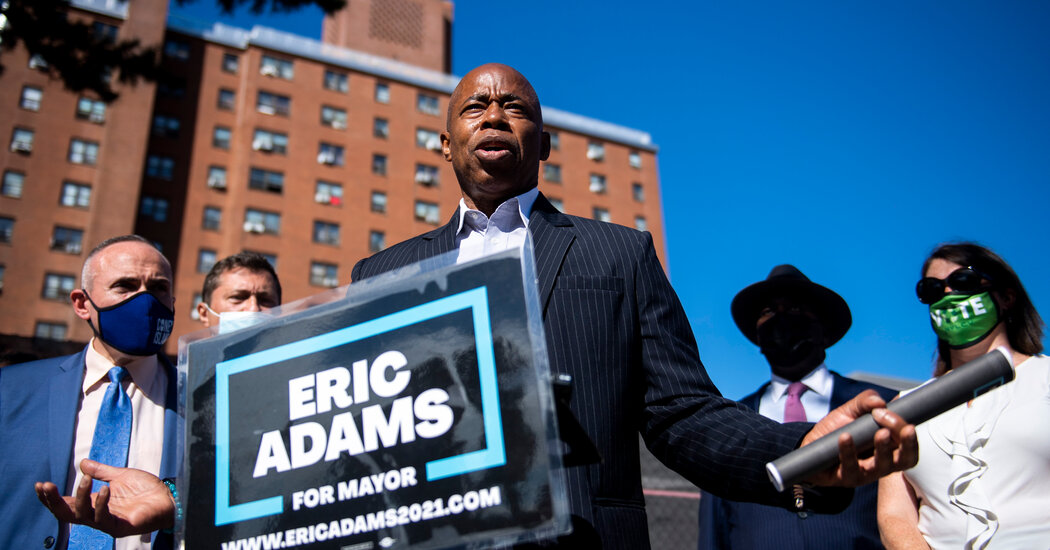 Eric Adams is heavily favored to become the next mayor of New York City, but that hasn’t stopped him from amassing an intimidatingly large war chest ahead of November’s general election.

Mr. Adams, the Democratic nominee, has raised another $2.4 million since late August, leaving his campaign with roughly $7.7 million to promote his message and to signal strength. Over the course of five weeks, some 700 donors gave him the legal maximum donation of $2,000, according to the latest campaign finance reports released on Friday.

His Republican opponent, Curtis Sliwa, raised roughly $200,000 during the latest filing period and has $1.2 million on hand. Only two people gave him the maximum donation of $2,000.

Mr. Adams, the Brooklyn borough president, has spent much of his summer focused on fund-raising, traveling to the Hamptons and Martha’s Vineyard and courting wealthy donors who favor his brand of centrism. His travels appeared to have paid off: He raised more than $950,000 from donors outside New York City during the latest filing period — about 40 percent of his haul.

His donors ran the gamut, from billionaires to a plumber from the Bronx.

Mr. Adams raked in handsome donations from the hedge fund industry, too, including from John Griffin, the founder of Blue Ridge Capital; Lee Ainslie, the founder of Maverick Ventures; and the New York Mets owner, Steven A. Cohen, the chief executive of Point72, who donated $1,800 to Mr. Adams, and whose employees donated an additional $26,500.

Mr. Adams has said in recent weeks that he would swing open New York’s doors to businesses big and small and use incentives when necessary to lure them here. In his rhetoric, he is drawing a sharp contrast with the outgoing mayor, Bill de Blasio, who has openly quarreled with the city’s business elite.

“The support for our campaign from every corner of the city continues to be overwhelming and humbling,” Mr. Adams said in a statement on Friday.

Early voting in the general election begins on Oct. 23. Mr. Adams and Mr. Sliwa are expected to participate in two debates this month on WNBC and WABC. Mr. Sliwa, who is fighting for exposure, is pushing for more debates.

Mr. Sliwa recently qualified for public matching funds and has sought to capture attention with dog-and-pony media events, like crossing the George Washington Bridge to New Jersey in a showy effort to find out where Mr. Adams lives. But Mr. Sliwa’s proclivity for drama backfired last week when his campaign claimed on Twitter that he had found a gun at a crime scene on the Upper West Side when, in fact, he had not.

Mr. Sliwa’s campaign released a statement on Friday trumpeting his recent fund-raising and said it believes “this will be a very competitive and close race.”

But even Mr. Sliwa has acknowledged that he is facing an uphill battle. As a sign of Mr. Adams’s broad appeal, both Mr. de Blasio, a self-described progressive, and Michael R. Bloomberg, a pro-business centrist, have embraced him.

Mr. Adams’s most recent campaign finance filings indicate that special interests from a cross-section of New York labor and industry are eager to make his acquaintance. Many of his donations came from landlords and developers, including William Blodgett, the co-founder of Fairstead; the Durst Organization executive Alexander Durst; Anthony Malkin, chairman of the company that owns the Empire State Building; and Joseph Sitt, chairman of Thor Equities Group.

There were also donations from the philanthropists David Rockefeller Jr. and Susan Rockefeller; Jeffrey Gural, a major landlord and the owner of the Tioga Downs casino in the Southern Tier; and members of the Rudin family, who are prominent in commercial real estate.

The Adams campaign has spent about $630,000 since late August — on consultants, polling and other expenses — and appears to saving the bulk of its money for advertising in the final weeks before Election Day. Mr. Sliwa spent $1.5 million during the latest filing period, including about $1 million on television and radio ads.

Bruce Gyory, a veteran Democratic strategist, said Mr. Adams most likely plans to spend his campaign war chest “not just to promote interest in his candidacy, but to build a mandate for his approach to governing New York.”

“At every turn in this mayoral race, Adams and his campaign have been strategic,” he said. “So my hunch is that Eric Adams will use this spending advantage purposefully.”

Mr. Adams has already started to plan his transition ahead of Inauguration Day in January. In recent weeks, he has released a series of broad-based proposals about how he would address climate change and the affordable housing crisis.

Now that Mr. Adams can devote less time to fund-raising, he is planning a trip that he hopes will benefit him as mayor: visiting the Netherlands to examine its solutions to flooding.

A firm date for the trip has yet to be determined.