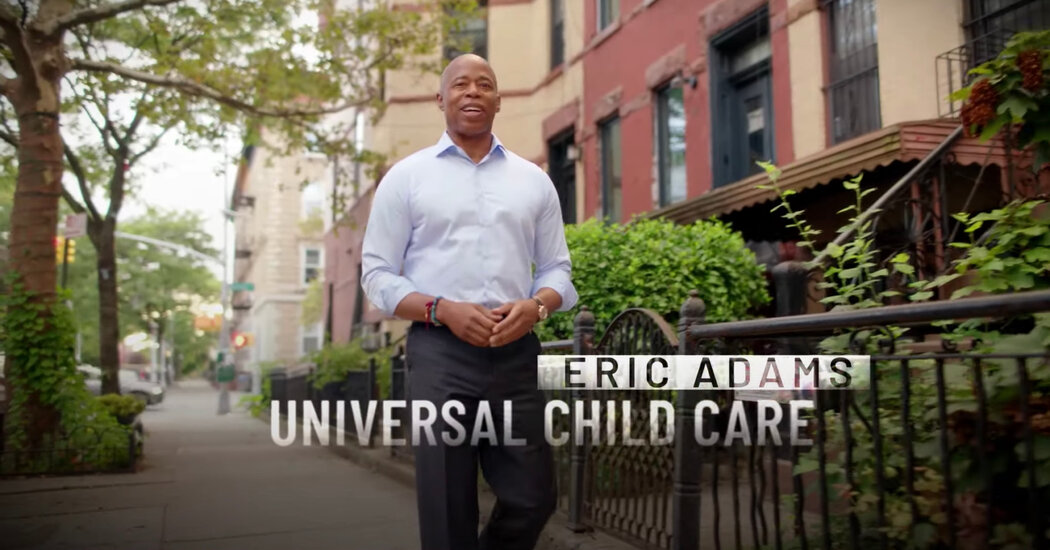 With a month left until Election Day, Eric Adams is finally starting to use some of his sizable campaign war chest, releasing his first post-primary television ad on Tuesday in the general election for mayor of New York City.

The ad focuses on his working-class roots and his mother, Dorothy Adams, who died in March — a departure from his ads during the Democratic primary, which focused on policing.

“My mom cleaned houses and worked three jobs to give us a better life in a city that too often fails families like ours,” Mr. Adams says in the ad, as a Black woman is shown cleaning a home and embracing her children at the end of the day.

Mr. Adams then appears onscreen with a smile and says that the city must invest in early childhood education and affordable housing: “That’s how we really make a difference.”

The ad marks the beginning of the final stretch of the mayor’s race, which pits Mr. Adams against Curtis Sliwa, the Republican candidate, on Nov. 2. Mr. Adams, 61, the Brooklyn borough president, is widely expected to win and has been promoting himself and his centrist platform as the future of the Democratic Party.

He won a contentious Democratic primary by focusing on public safety and his background as a police officer. Now he is trying to highlight other priorities like reducing the cost of child care for children under 3.

Mr. Adams wants to offer “universal child care” for families that cannot afford it by reducing the costs that centers pay for space with tax breaks and other incentives. He also wants to rezone wealthy neighborhoods to build more affordable housing and to convert empty hotels outside Manhattan to supportive housing.

Mr. Sliwa, 67, has focused his ads on the message that he is compassionate toward homeless people — as well as his small army of rescue cats — and that he would offer a departure from Mayor Bill de Blasio. He has also criticized Mr. Adams for spending his summer meeting with the city’s elite and traveling outside the city to court donors.

“The choice is somebody up in the suites like an Eric Adams — a professional politician — or somebody down in the streets and subways — that’s Curtis Sliwa,” he says in one ad. “I’ve got the touch with the common man and common woman.”

Mr. Sliwa’s ad shows Mr. Adams standing next to Mr. de Blasio, who has supported Mr. Adams during the race.

But Democrats outnumber Republicans by nearly seven to one in New York City, and Mr. Sliwa has struggled to gain attention, let alone momentum. Mr. Adams also has a major fund-raising advantage: He has more than $7.5 million on hand; Mr. Sliwa has about $1.2 million.

Mr. Adams’s new ad was produced by Ralston Lapp Guinn, a media firm that worked with him during the primary. The team has made ads for other Democrats like President Barack Obama and Tim Walz, the governor of Minnesota.

The ad mentions Mr. Adams’s signature issue — public safety — noting that “we all have a right to a safe and secure future”

Mr. Adams, who would be New York City’s second Black mayor, has often spoken about his mother on the campaign trail and of growing up poor with five siblings. Ms. Adams died earlier this year — something Mr. Adams revealed in an emotional moment during the primary.

In recent interviews, Mr. Adams has said that it was two months into the Democratic primary when he decided to focus on his personal narrative.

He said in a recent podcast with Ezra Klein of The New York Times that he decided to share a “series of vignettes” about his life, including being beaten by the police, having a learning disability and working as a dishwasher, and he believed that his authenticity won over voters.

“Each time I stood in front of a group of people and gave them another peek into who I am, they said to themselves, ‘He’s one of us,’” he said.