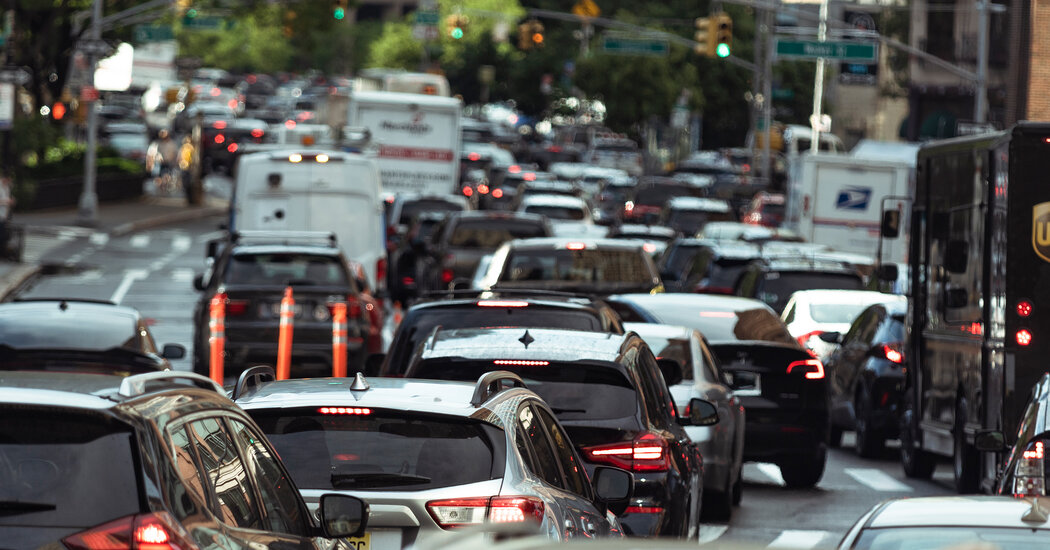 If you’ve found yourself in a car in New York City lately — if you’ve had the experience of traveling along Flatbush Avenue on a Friday afternoon — you have probably spent some time inventing new, angrier four letter words.

Traffic that was manageably awful prior to the pandemic (before it momentarily disappeared in the early lockdown phase) has become dependably horrific. You are not imagining this. There are more cars on the road than ever, and fewer people are using public transportation.

Between September 2020 and this past August, more than 122,000 cars have been newly registered in the city, an increase of 26 percent over the previous year. At the end of September, subway ridership was down nearly by half from the equivalent period before Covid. Busier streets have brought greater danger. As my colleague Winnie Hu has reported, traffic deaths have climbed this year to their highest level in nearly a decade.

Although the New York State Legislature approved a congestion-pricing plan for the city two years ago — a plan that would exact a toll on drivers entering Manhattan between 60th Street and the Battery — the review process is expected to extend into 2023. In an effort to determine what else might be done — and with luck more quickly — I asked experts and ordinary New Yorkers who spend a lot of time on the road what the best solutions might be.

Here are their responses (which have been edited):

One thing we can do is dispel the idea that riding public transit is unsafe. Studies have shown us that it’s not a vector for Covid. Beyond that, something that has been tried since 1980 is occupancy restriction. Basically, cars would have to have two or more occupants to enter the central business district. This was done during the transit strike of 1980 and after Sept. 11, for over two years at Lower Manhattan crossings. Then it was done after Superstorm Sandy. This is something that could be done very quickly.

Another issue is that the police don’t like doing parking enforcement. When you tell cops to do traffic enforcement, what they do is just give you more tickets. They don’t understand traffic science. Instead of having a goal of number of cars towed, let’s look at percent of lanes cleared. Civilianize traffic enforcement, and you’d have someone recognizing what’s important versus just turning in a load of tickets.

I’d also increase the ability to walk or bike to Manhattan from Brooklyn, Queens and New Jersey. I have proposed bike and pedestrian bridges to the city — it’s happening all over the world. Imagine if people could walk to Manhattan from the Queensbridge Houses, the largest public housing complex in the country. Imagine if you could Citi Bike from New Jersey. A hundred years ago we were the leader in bridges in transportation, now we are not even the followers.

Certainly we don’t have a city where we can have everyone driving. We have a city that was built around public transit. Buses go to all the places that are pumping the blood into this city.

Bus riders carried us through this pandemic. Fifty percent of bus riders are immigrants; 75 percent are New Yorkers of color and about 35 percent are essential workers. We have 6,000 miles of road in New York City and a little over 100 miles of bus lanes. So you see how little priority buses are given.

But there is hope in sight. Let’s think of how we can make the most of the Streets Master Plan — a fairly major street improvement project that was put into place by the sitting mayor.

Bus routes still follow old streetcar lanes that haven’t been re-examined for decades. The cost of putting in a bus lane is basically the cost of industrial red paint. But there’s so much pressure from drivers who are wealthier and better resourced. There needs to be a lot more bravery with our streets — and this is the moment we deliver on it. If you look at who is parked in bus lanes, a lot of the time it’s N.Y.P.D. vehicles.

I think congestion pricing is a step in the right direction but it has to start from 96th Street all the way to the tip of the island — not 60th Street. That’s what the plan was originally; maybe the Upper East Side and Upper West bourgeoisie raised their voices.

There is an H.O.V. lane on the Queensboro Bridge in the morning. It’s a great idea, but guess what? It’s not enforced. I’d say 50 percent of the people driving in the H.O.V. lane are driving by themselves. There should be an H.O.V. lane in each direction on every bridge going into Manhattan. This isn’t Texas. We’re in a tight space.

I would also say that in Brooklyn and Queens there are a lot of black cars for hire from New Jersey and Pennsylvania. The drivers are not following the rules. Every time I see one of these cars, I pull over, because the drivers are like kamikazes. It’s anarchy. How is this not regulated?

I drive to Pennsylvania for work a few times a week. When I’m in the city, I take the subway. What I see is that bikes and motorbikes are just unregulated. With e-bikes, you’ll see them going the wrong way; you’ll see bikers run traffic lights. It slows down what is already a slow process.

While the number of registered cars has gone up, the number of out-of-state cars seems to have gone up too. You’ll see these cars all over Brooklyn — I’ve seen plates from New Jersey and Pennsylvania and as far as way as Idaho. There’s no way that these people are just visiting because I see the cars being moved from one side of the street to another.

In residential neighborhoods these cars should not be allowed to park on the street. I park my car in a garage, but we could have a system similar to the kind in some suburbs and towns. It would be good to have stickers on parked cars that basically said: “I live in Cobble Hill. I live in Brooklyn Heights. I can park in this neighborhood.”

Congestion pricing will affect Manhattan, but Downtown Brooklyn is a mess and a lot of Queens is a mess. You don’t want to make driving so expensive that it’s a tax on the poor but there has to be some kind of happy medium where driving is discouraged.

Flood the city’s transit deserts with subsidized electric-assist bicycle-share systems. This will enable hundreds of thousands of lower-income residents to efficiently access subway and commuter-rail lines, connecting them to jobs, schools and medical care more efficiently and affordably than meandering local buses or private or ride-hail vehicles. Why electric-assist? So residents can cover the distances, typically several miles, swiftly.

This will require repurposing some travel lanes and free curbside parking as protected bike lanes and bike-share docks. Don’t subject this to community-board vetoes; go ahead and do it. The health and access benefits will far outweigh any inconvenience, especially as some car owners find that the e-bikes make their vehicle superfluous.