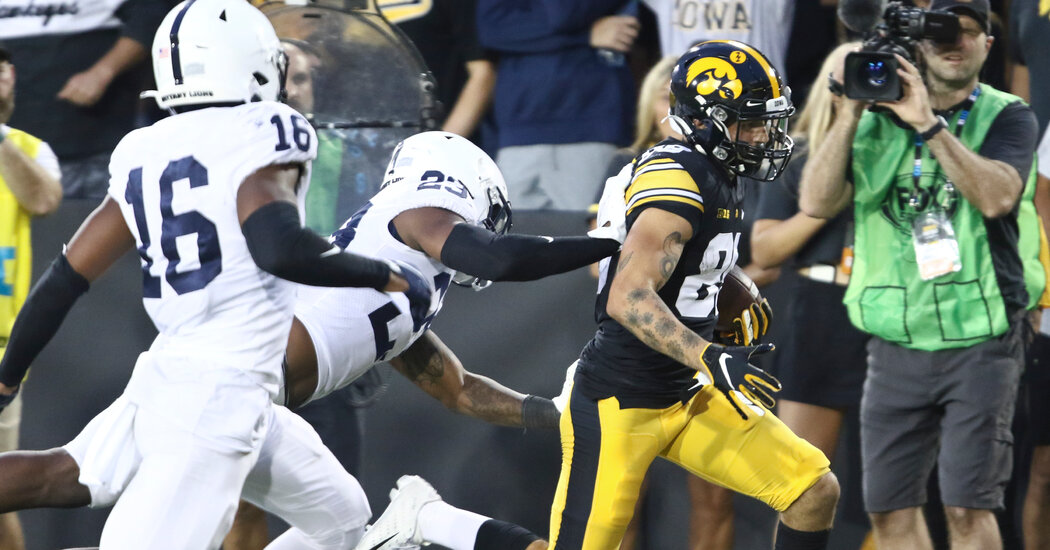 On a day that saw 103 combined points in two early afternoon college football games, Iowa and Penn State deviated from the day’s script.

The defense of the No. 3 Hawkeyes led the nation in takeaways entering Saturday’s game. Its opponent, the No. 4 Nittany Lions, have rarely given up a red zone score. It was a clash of frugal defenses, one that was expected to be low scoring. And it ended with Iowa downing Penn State, 23-20, in the Big Ten’s first matchup since 1962 between teams ranked in the top five that did not include Ohio State or Michigan.

The playoff implications of the battle between the two unbeaten teams was obvious. Through six weeks of the college football season, the Big Ten, likely the country’s most competitive conference outside of the Southeastern Conference, seems primed to send at least one team to the College Football Playoff. And the Hawkeyes have cleared two of the toughest hurdles on their schedules with wins over Penn State and Iowa State, which was ranked when it lost to the Hawkeyes, 27-17, in Week 2.

The conference’s playoff hopes appeared bleak a few weeks ago, however, when Oregon beat Ohio State, the Big Ten’s perennial juggernaut that has been in the playoff four times. The Buckeyes haven’t lost a game since then (they pummeled Maryland, 66-17 on Saturday), and the Big Ten featured five top-11 teams in the recent Associated Press Top 25 college football poll. The Atlantic Coast Conference, carried by Clemson in the past few years, seems to be out of playoff contention with the Tigers, unranked for the first time since 2014, already at two losses on the season.

If top-ranked Alabama and No. 2 Georgia remain undefeated, members of the Big Ten will likely be in an in-conference fight to see which team will be left to contend for one of the four semifinal spots by season’s end. Iowa will almost surely be in that conversation after a gritty win on Saturday in which it didn’t lead until the fourth quarter.

With less than seven minutes left, quarterback Spencer Petras found receiver Nico Ragaini, who was wide open off a play-action pass, for a 44-yard touchdown. It was an untimely miscue by a typically sound Penn State defense, which had held up for most of the game. The Nittany Lions had 11 tackles for losses, and they held Iowa to 13 points through three quarters.

“That was something we had in our back pocket the whole game,” Petras said afterward about the go-ahead score. He added that the team was waiting to run the play during a rare moment when the Penn State defense didn’t blitz.

“Just a great call. Great play design. It came at the right moment. Not a moment too soon,” he said.

The game’s turning point was in the second quarter, though, when Penn State’s starting quarterback Sean Clifford left the game with an unspecified injury, and Penn State couldn’t hold on to the lead it had built (17-10 in the first half).

On the play before his exit, Clifford took a hit from Iowa linebacker Jack Campbell while attempting a throw — an incompletion on third down that led to a field goal to give Penn State a 17-3 lead. He was 15 for 25 with 146 yards, two interceptions and a rushing touchdown.

Clifford’s backup, Ta’Quan Roberson, fumbled on his first snap of the game and was nearly intercepted on the next play. With the fans in attendance at Kinnick Stadium roaring from every corner of the stands, Penn State then committed three straight false start penalties, killing the drive at the 6-yard line and forcing a punt.

Iowa’s first five possessions featured three punts, an interception, and a goal-to-go opportunity that ended in a sack for a loss of nine yards.

Iowa had intercepted Clifford on Penn State’s first possession of the game and got the ball at the Nittany Lions’ 8, but Penn State sacked Spencer Petras on third and goal, forcing a field goal.

Penn State had three sacks, and wrapped Petras up on a third-and-goal in the fourth quarter.

Iowa’s best drive of the first half came early in the second quarter. A defensive pass interference kept the drive alive, and a 22-yard strike from Petras to Ragaini helped set up an 8-yard touchdown reception for receiver Charlie Jones.

“We’ve had confidence in him even when it was a little bumpy a year ago,” Iowa Coach Kirk Ferentz said of Petras. “I know the outside world didn’t share it as much. But we get to see the players day by day, and teammates get to see each other. They know how invested he is. He’s not a weak-minded guy. He’s on the right track.”

The Hawkeyes also used field position to their advantage as their offense struggled. Punter Tory Taylor pinned the Nittany Lions inside the 20-yard line six times.

Afterward, Ferentz complimented his team’s ability to contribute on offense, defense and special teams for the win.

“Especially in a game like this, where you know the competition is about as good as it’s going to get, for us to have a chance, it sure helps when we’re complementing on all three,” he said.

Gold and black jerseys converged on the field as the game clock wound to zero, cementing the Hawkeyes’ position at the top of the Big Ten West.

“That’s one of those things that you love to see. It’s always super fun,” Petras said. “You look back at the biggest games in our program’s history, and the crowd is usually down there storming the field. So that was sweet. That was awesome. What a way to celebrate that win.”