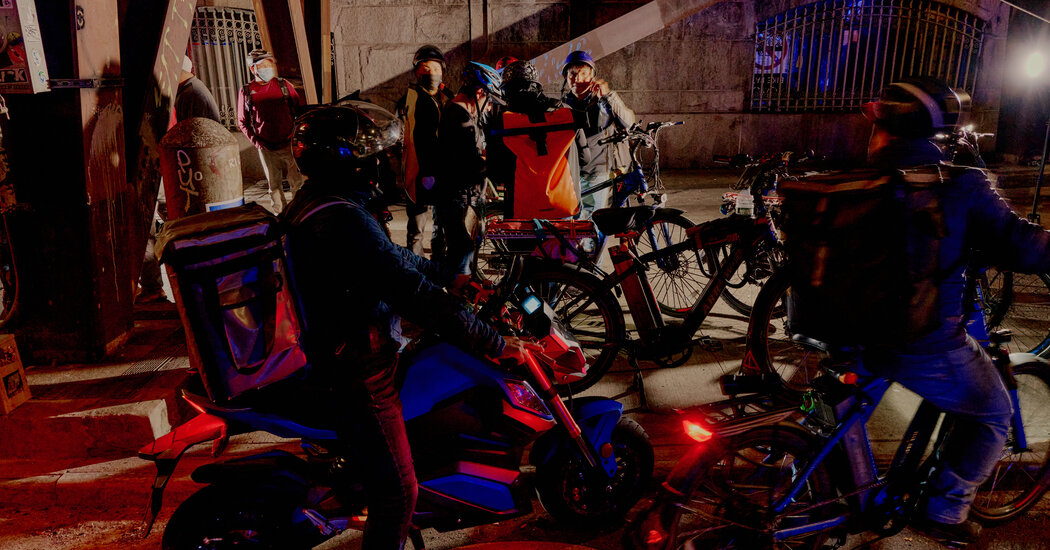 Seven nights a week, starting around 9:30, Vincent Carrasco cheers and whistles at food delivery workers as they ride their bicycles into Manhattan after crossing the Queensboro Bridge. The message he’s sending? “Someone’s looking out for you.”

Mr. Carrasco also delivers food for a living, and he takes up his nightly post to make this stretch of East 60th Street feel less desolate, to deter crimes against delivery workers, who have faced a surge in robberies. On one evening last month, nine others joined him after making plans to gather through groups on WhatsApp and Facebook.

It’s a scene being repeated around the city at the otherwise isolated spots where, delivery workers say, they feel most threatened. They set up the patrols themselves because of what they consider to be an inadequate response by the New York Police Department to a rise in crime.

“We need to organize among ourselves to protect ourselves,” Mr. Carrasco, 39, said as he began his watch. “If we don’t do this, no one else will protect us.”

Mr. Carrasco, who is originally from the state of Guerrero in Mexico, got the idea to organize the watch group in April. He had just finished a delivery in the Sunnyside section of Queens when he saw two people standing in the middle of the street ahead of him and got spooked.

Thefts of the electric bicycles that delivery workers in the city rely on — which can cost up to $3,000, or more than a month’s pay for some, to replace — had been on the rise, and Mr. Carrasco feared he was about to be attacked.

He turned and fled, and although he was unharmed, it bothered him that he had to work in fear of being robbed of something so essential to his livelihood. So he and a close friend, José Nevares, hatched a plan to patrol the streets.

To recruit others, they spread the word through a Facebook page called “Delivery Boys en Acción NY” and a 250-member WhatsApp group. Several other similar groups exist on Facebook and WhatsApp, with names like “Yo Soy Delivery Boy” and “El Chapín de Dos Ruedas,” meaning “Guatemalan on Two Wheels.”

The patrols keep watch in dangerous areas, use apps to track stolen bikes and organize rallies, safety campaigns and bike registration events. Last month, New York Magazine profiled one group that positions itself near the approach for the Willis Avenue Bridge, which connects Manhattan and the Bronx.

Delivery workers frequently cross the city’s bridges, like so many New Yorkers, to get to their jobs in Manhattan from their homes in other boroughs. The bridges’ entrances and exits tend to be isolated, far from the relative safety of the city’s crowded streets.

Robberies and other attacks on delivery workers have been on the rise since the early days of the pandemic, as restaurants closed and much of the city’s office work force was homebound, leading to a surge in food deliveries.

The number of reported electric bike thefts doubled in 2020 from the year before, police data shows. Reported thefts of all kinds targeting delivery workers increased to 332 cases in 2020 from 201 in 2019. More than 270 thefts had already been reported this year through Sept. 7.

But many of the crimes go unreported, because the bike delivery workers — often immigrants from Central America, South Asia and West Africa — fear interacting with the authorities. An estimated 80 percent of the workers are undocumented, said Hildalyn Colón, director of policy and strategic partnerships for Los Deliveristas Unidos, an advocacy group.

Plus, the workers don’t expect the police to do much even if they do report a theft. “A bike robbery isn’t at the top of the police’s priority list, and that’s the frustration with delivery workers,” Ms. Colón said. “That’s why delivery workers decided to take matters into their own hands.”

More than half of delivery workers say they have been victims of bike theft, with about 30 percent of those workers saying they have been physically assaulted during a robbery, according to a survey that the Worker’s Justice Project and Cornell University conducted from December through April. About half said they had been in an accident or a crash during a delivery, and of those who needed medical care, three in four said they had to pay for it with their own money.

The survey, which interviewed about 500 of New York City’s 65,000 delivery workers, also found that about half of respondents did not report bike robberies to the police, and that 28 percent of the respondents who did go to the police said officers hadn’t filed a report.

“Among undocumented communities, there’s a lot of fear around reporting to law enforcement and what consequences that might have,” said Kim Ouillette, an employment lawyer at the nonprofit organization Legal Aid at Work. “There’s a lot of anti-immigrant rhetoric and people feeling that if someone finds out their status, they could be reported to ICE and get deported.”

In interviews, representatives for the New York Police Department said it had increased patrols in the parts of the city where bike thefts were more likely to take place, including northern Manhattan and Queens. They confirmed that the department did not inquire about the immigration status of individuals filing reports.

Though bike robberies have ebbed slightly this year, they are “still at a level that is concerning,” said Michael LiPetri, chief of the department’s crime control strategies unit.

He said he encouraged efforts by delivery workers to create watch groups. “We support people that are looking to keep their eyes and ears open to help,” Chief LiPetri said.

But both he and Rodney Harrison, chief of department at the police department, urged the workers to call the police if they witnessed a crime during one of their watch shifts.

“Regarding getting involved with the enforcement, let the professionals do it,” Chief Harrison said.

The jump in crimes against delivery workers led to the creation of Los Deliveristas Unidos, or the United Delivery Workers. The group was formed with the help of the Worker’s Justice Project, a nonprofit organization that represents immigrants working in low-wage jobs and has fought for rights like higher pay and better access to restaurant bathrooms for delivery workers.

In late September, in a big victory for these efforts, the New York City Council passed legislation designed to improve conditions for workers employed by app-based delivery companies. In addition to setting minimum pay levels and granting access to restaurant bathrooms, the legislation empowers workers to decide for themselves, without fear of being penalized, how far they’re willing to travel for orders — and to specify whether they’re willing to cross bridges.

But the package does not provide additional protection by law enforcement, and Mr. Nevares said he did not think it went far enough to prevent robberies. He said he wanted to see a law that resembled the one protecting Metropolitan Transportation Authority workers from assault, with offenders facing up to seven years in prison.

Besides living with the fear of being robbed, Mr. Nevares said, many of his colleagues worry that their lack of English skills or their immigration status will make it harder for them to receive basic services, such as medical attention if they’re hurt in an accident. That’s why he also makes sure to discuss these topics with his colleagues during the watch shifts.

“The goal for the civil guard group is to decrease the number of robberies, but it’s also about educating other delivery workers about their rights,” said Mr. Nevares, who is originally from the Mexican state of Morelos. “We’re not just a number in an app. We’re human beings.”

Mr. Nevares uses an app to track his fellow delivery workers throughout the day. Workers in the WhatsApp group encourage new colleagues to buy GPS devices and share their locations so other members can help keep them safe, he said.

In the Facebook group, Mr. Carrasco posts when he and his colleagues have arrived at the Queensboro Bridge to start their night shift. He was keeping watch there on the day in early September when the remnants of Hurricane Ida swept through the city.

His landlord called while he was on duty to inform him that his basement apartment in Queens had flooded. Mr. Carrasco is staying with Mr. Nevares while his apartment remains uninhabitable.

“All I wanted was to go home and drink something hot after that shift,” Mr. Carrasco said. “But I had to stay drenched.”