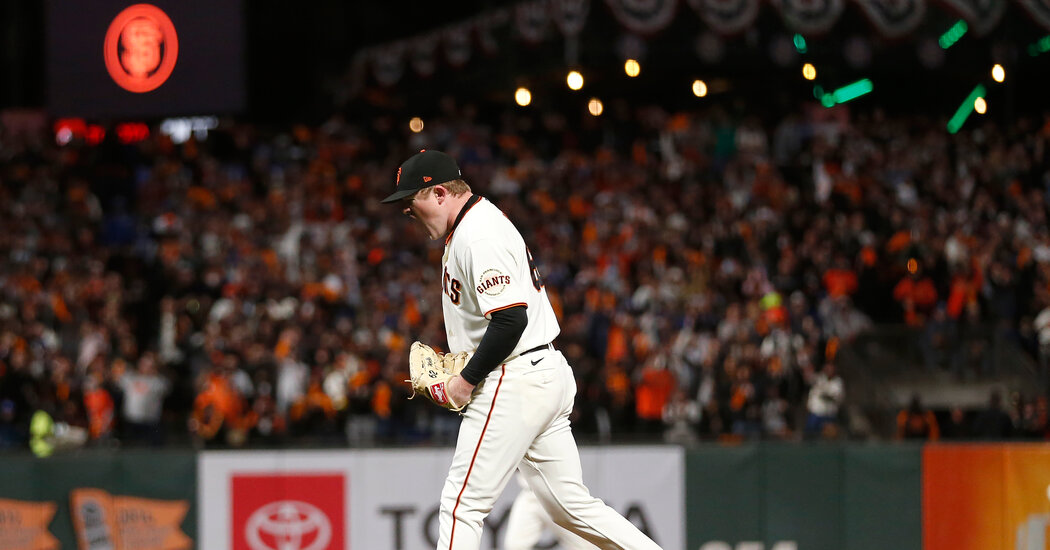 SAN FRANCISCO — When the San Francisco Giants won three World Series titles over the five-year period from 2010-14, they did so with young pitchers blossoming at just the right time. Without Tim Lincecum, Matt Cain and Madison Bumgarner, the Giants would not have risen to such heights.

As they started their latest postseason quest on a chilly Friday night by the San Francisco Bay, a fresh-faced right-hander tamed the Los Angeles Dodgers and offered indications that something similar could be developing. Logan Webb, 24, dominated with an assortment of fastballs, changeups and ground ball-inducing sinkers over seven and two-thirds scoreless innings, handing the Giants a 4-0 win in Game 1 of this National League division series.

It may seem presumptuous to discuss Webb in terms reserved for Lincecum, Cain and Bumgarner. But the catcher who was behind the plate for all three of those World Series titles said afterward that he could see the parallels.

“It felt a little like Lincecum against the Braves in 2010,” Buster Posey said, flashing back to another division series Game 1 when Lincecum threw a complete game, two-hit gem in a 1-0 win over Atlanta.

At the time, Lincecum was 26, with nearly four full seasons on his résumé.

Webb has been in the majors for parts of three seasons, but didn’t establish himself in the rotation until last year. Against the Dodgers, he became the youngest San Francisco pitcher to start a postseason game since Bumgarner in 2012 — and the second-youngest Giant to start a Game 1 since Bumgarner’s 2012 National League Championship Series start when he was 23.

“I’m so impressed with him,” said Kris Bryant, whose solo home run in the seventh helped chase Dodgers starter Walker Buehler. “His first playoff experience and he was just out there pretending like it’s a game in the backyard. It was really fun to watch. Really fun.”

This feeling of something special developing has been gathering steam for a couple of months. Webb’s 2.40 E.R.A. since May 11 is the second-best in the majors, among pitchers with at least 20 starts, trailing only Buehler (2.32). On Friday he outshined his Los Angeles counterpart, striking out 10 and walking none.

Webb grew up in Rocklin, Calif., just on the other side of Sacramento, about 90 minutes from San Francisco. The Giants’ fourth-round pick in the 2014 draft, he grew up following the Oakland Athletics because that’s who his father liked. He was also a huge fan of the N.F.L.’s Raiders.

He’s come back from Tommy John surgery and has said he is considered legally blind. He was diagnosed with a severe astigmatism, which causes blurred vision, in third or fourth grade when he had difficulty seeing the ball.

But as he blossomed this summer, it was hard to believe he had anything standing in his way. Webb, who went 11-3 with a 3.03 E.R.A. in 27 games (26 starts), finished the season making 20 consecutive starts without a losing decision. It is the longest such streak for the Giants since Jack Sanford in 1962.

“He’s got three pitches that are elite, which is definitely a luxury on my end,” Posey said.

Webb allowed only two hits over the first five innings and got help from San Francisco’s impressive defense, including a slick, inning-ending double play in the fourth when second baseman Tommy La Stella fielded Justin Turner’s ground ball up the middle and shoveled the ball from his glove to Brandon Crawford at the bag while La Stella’s momentum was carrying him toward center field. The toss didn’t arrive in a perfect spot, but Crawford was able to pluck the ball out of the air and execute a snappy relay throw that reached first base just in time.

Webb described the play as “sick.” Kapler said he thought “it was one of the better plays we’ve made all year.”

And with that, the Giants have the Dodgers on their heels.