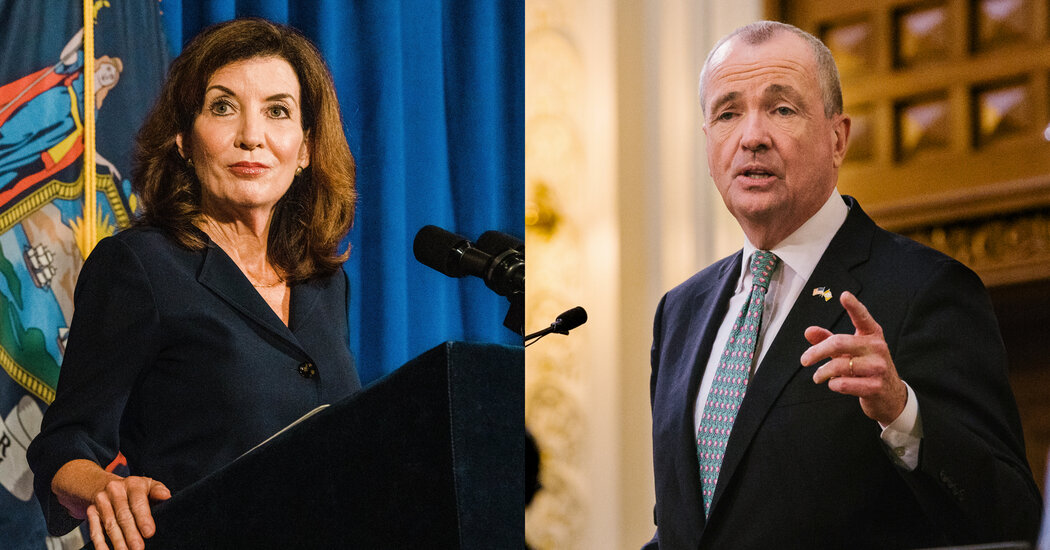 It’s Wednesday. We’ll look at how two governors are faring as the coronavirus crisis continues and pandemic fatigue rises. We’ll also take a short look at a shirt story.

The New Jersey governor’s race has become one of the first statewide contests with a focus on how voters are reacting to strict coronavirus mandates. In New York, where Gov. Kathy Hochul expanded vaccine mandates in the 50 days since she was sworn in, a poll released on Tuesday found that she leads the likely Democratic field.

After an opening like that, you might expect this to be a tale of two governors, both Democrats. But this is really a tale of this November, when New Jersey holds its election, and next June, when New York will hold its Democratic primary.

First, New Jersey. The contest there is clearly defined: Gov. Philip Murphy is facing Jack Ciattarelli, a Republican who was known for moderate views when he was a state assemblyman. But Ciattarelli has tacked right, pounding away at issues that galvanize Donald Trump’s conservative base, like Murphy’s order requiring face coverings for children 2 and older in day care centers.

Hochul’s opponents in New York are hypothetical for now. She is the only Democrat who has declared her candidacy. Neither of the two other officials in matchups in the poll from the Marist Institute for Public Opinion — Letitia James, the state attorney general, nor Jumaane Williams, the New York City public advocate — has done so.

Some political strategists I spoke with on Tuesday said the New Jersey race could indicate whether Republicans are energized the way Democrats were a year ago; my colleague Tracey Tully writes that turnout is seen as an essential element in Ciattarelli’s calculations for next month.

In New York, where the election is 13 months away, Hochul began setting up a statewide campaign operation when Andrew Cuomo resigned in August and she became governor. Cuomo had repeatedly attacked the investigation that ultimately led to his departure — an investigation led by James’s office — as politically motivated.

My colleague Luis Ferré-Sadurní writes that, judging by the Marist poll, Hochul’s efforts appear to be paying off. In a hypothetical three-way primary, 44 percent of New York Democrats said they would vote for Hochul, 28 percent for James and 15 for Williams. Another 13 percent said they were undecided.

What if Cuomo were to run again? Voters again preferred Hochul in a four-way race that included Cuomo, who left office with $18 million in campaign contributions. The poll found that 36 percent would cast ballots for Hochul, 24 percent for James, 19 percent for Cuomo and 9 percent for Williams. The remaining 12 percent said they were unsure.

Hochul has made responding to the fallout of the pandemic a top priority, implementing vaccine mandates and expediting coronavirus relief funds for struggling rental tenants and undocumented immigrants. Murphy, in New Jersey, was one of the last governors in the country to drop a statewide indoor mask mandate.

That was at the beginning of the summer. Two months later, when cases were climbing again as the highly contagious Delta virus spread, he “strongly recommended” that people again wear masks indoors.

But he said that people who work in schools, day care centers and health facilities can either be vaccinated or undergo regular testing, an opt-out that matters to New Jersey’s influential teachers union, a longtime Murphy ally. New York City, by contrast, has no opt-out for teachers or health care workers.

Polls have given Murphy some of his highest marks for the way he has handled the pandemic. He has said he considered it one of the defining issues setting him apart from Ciattarelli, who attacked Murphy’s mask rule for children in day care. “This is unconstitutional, un-American and has no scientific backing,” said a recent fund-raising email from Ciattarelli and his running mate, Diane Allen.

Oh, that patchy early morning fog. It will give way to a mostly cloudy day with temps in the mid-70s. They will drop to the low 60s in the evening, with a still-cloudy sky.

In effect until Nov. 1 (All Saints Day).

Nelson Mandela, who was recognized as a global hero, was also recognizable. His colorful, somewhat casual-looking shirts set him apart from what the fashion historian Valerie Steele called “the conventional male ruling-class look.”

Ten shirts that belonged to Mandela will be displayed at the museum of the Fashion Institute of Technology, where she is the director and chief curator, starting today. The shirts were sent from South Africa by Mandela’s daughter Makaziwe Mandela and a granddaughter, Tukwini, according to Arlan Ettinger, the president of the Manhattan auction house Guernsey’s.

He said the exhibition was a prelude to an auction in December to raise money for a memorial garden in Mandela’s hometown, Qunu, where Mandela was buried in 2013.

Perhaps the most formal shirt in the exhibition was the one that Mandela wore to meet Queen Elizabeth II. Mandela wore it as he wore all the shirts, untucked and with dress slacks. Back home in South Africa, the shirts stood out in contrast to the dark suits of government officials.

Some South African historians have noted that the shirts are not traditionally African. Mandela was said to have discovered them after seeing the Indonesian dictator Suharto in the mid-1990s. Steele said Suharto’s strongman predecessor, Sukarno, had favored the look in the 1950s.

Mandela liked it, Yusuf Surtee, who owned a chain of men’s stores in South Africa, recalled in 1997, “and he wanted one in its image.” Soon admirers were sending Mandela shirts, so many that he was rarely seen wearing the same one twice. Steele said they “became emblematic of post-apartheid freedom, not only his freedom but the country’s freedom.”

“The fact that Mandela really preferred these shirts seems to me a rejection of Western conventions of power and a sign of his bonds with all those people in Africa and Asia who struggled against colonialism and political impression,” she said.

But one three-piece pinstriped suit is in the exhibition.

“He decided that sometimes you do wear a suit,” Steele said.

The Q to Brooklyn can be more crowded at midnight than midday: mothers with strollers; older women with shopping carts; girlfriends sharing earphones and mouthing lyrics. It all makes for a comforting sight at that late hour.

On this particular night, the car I was on was empty except for three men who were sitting evenly spaced out across from me.

As the train rattled across the Manhattan Bridge, I shut my eyes against the fluorescent lights, my thoughts tumbling down into the dark water of the East River below.

I heard what I thought was a woman singing softly. Startled, I looked up at the three men across from me: an older one who was closely studying a small book; a young punk leaning forward and swiping his phone; and a big construction worker cradling his helmet as he slept, his mouth slightly open.

I must have fallen asleep too, I thought to myself.

The train went back underground, and I let my eyelids fall. I heard the beautiful voice rise again, more confidently this time, and a few notes of what sounded like opera. I tried to figure out where it was coming from, but the melody came to a halt.

Just the same three men, in the same positions.

I got off the train at Seventh Avenue and the construction worker did too. As I walked up the stairs, he broke into full song behind me. We went in different directions, but I could hear his soaring falsetto as it bounced off the buildings and filled the night sky.

I could still hear it faintly when I locked my apartment door two blocks away.