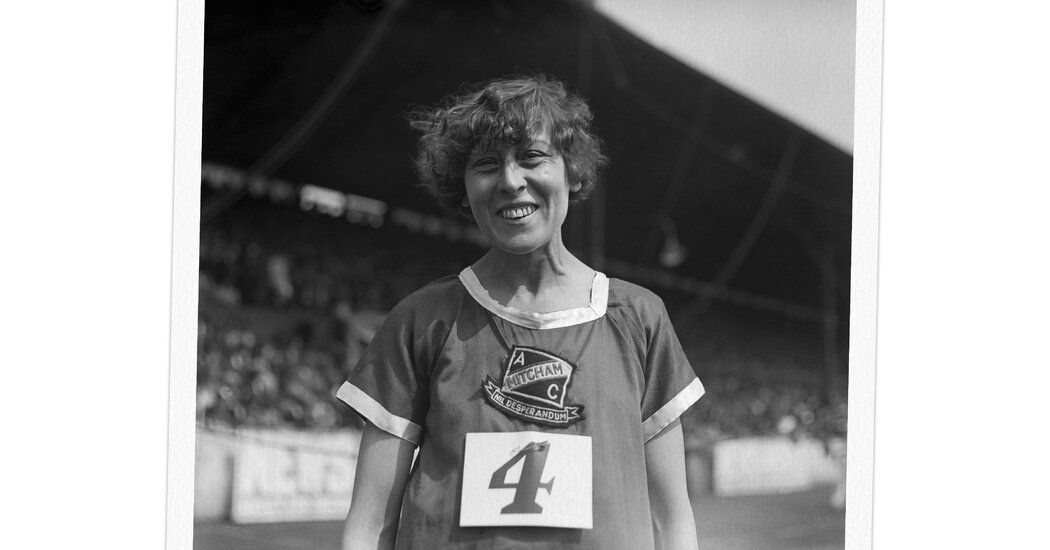 This article is part of Overlooked, a series of obituaries about remarkable people whose deaths, beginning in 1851, went unreported in The Times.

One Saturday in March 1935, Violet Piercy left her home in Clapham, in southwest London, and headed across the Thames and up to Highgate, a neighborhood in the north of the city.

From there, in a publicity stunt common to the 1920s and ’30s, she started to run, dashing more than five miles to the Monument in the city center, a 202-foot-tall column marking the site where the Great Fire of London was thought to have started in 1666. She sprinted up 311 stairs to the top. It took her 43 minutes and 2 seconds.

At some points along the route the police had difficulty keeping back hordes of curious onlookers eager to catch a glimpse of this “woman athlete” who had been written about in the newspapers. The prevailing notion at the time was that women were too fragile to run more than a few hundred feet.

“I did it to show that women are quite as able as men to accomplish feats of endurance,” Piercy, then 45, told the London newspaper The Evening Standard afterward.

The run established her as one of the first known female endurance runners in Britain. She is thought to have completed the 26.2-mile marathon distance twice — once on her own and once in an organized race in which she was given a head start on the men.

Her feats were all the more notable because she was one of the few women who dared to challenge the standard medical advice for women of that era, said Jaime Schultz, who has researched the history of women’s distance running as a professor in the department of kinesiology at Penn State University.

Women were told any “violent exercise” like running would disrupt their menstruation cycle and could even displace their uteruses, jeopardizing their fertility, Schultz said in an interview.

Athletics organizations in Britain in the 1920s restricted women to races no longer than 1,000 meters; in the United States, women were not permitted to compete at distances even that long.

During the 1928 Summer Olympics in Amsterdam, women were given the chance to prove themselves in the 800-meter event, but some reports exaggerated the results, saying that a few of the runners had collapsed after the race, cementing the narrative that women were too weak to compete. It would be another 32 years before women were permitted to participate in the 800-meter dash at the Games again. And it would take until 1984 for the women’s marathon to become an Olympic event.

Violet Stewart Louisa Piercy (whose surname was sometimes spelled Piercey in newspapers) was born on Dec. 24, 1889, in Croydon, about 10 miles south of London. She was educated at the private Old Palace of John Whitgift School.

Her father, George Piercy, an affluent property owner, died two weeks after she was born. A brother died when he was 8, which may have contributed to the poor mental health of her mother, Louisa Sophia Piercy. Newspaper articles of the time described her acting strangely toward her neighbors, including pretending to be a ghost who haunted the road.

Little is known about how or why Piercy began running. She joined several athletic clubs but would not have had the opportunity to run long distances with them.

But when she did start running she reveled at being in the spotlight. One of her earliest publicity events was in October 1926, when she ran what was then the traditional London Marathon course, from the town of Windsor to the capital city, in 3 hours 40 minutes and 22 seconds. (This year’s London Marathon was on Oct. 3.) Researchers now believe that she inadvertently altered the route and ran only a little over 20 miles.

Piercy attempted the feat after Gertrude Ederle, an American, became the first woman to swim the English Channel a few months earlier.

“I did it because I wanted to show the Americans what we can do,” Piercy told The Westminster Gazette, “and to prove that English women are some good after all.”

She tried to repeat the London Marathon run again in 1928 but retired after 20 miles because of excessive heat.

Piercy ultimately finished two marathon runs, in 1933 and 1936, each in about 4 hours and 25 minutes. She was said to rely on brown sugar and lemon juice to get her through her training. The Sunday Mirror of London said the 1936 run was to “prove that a woman’s stamina is equal to that of a man.”

Attention followed her throughout her running career. She was interviewed on BBC radio and filmed for newsreels, where she can be seen dashing along a road or track or jumping rope in training, wearing shorts, a white jersey, white socks and her inimitable black leather buckled shoes. In a scene in a short silent film, “Mary Had a Little Lamb” (1930), Piercy jogs along a London street with a sheep in tow.

Still, for all her achievements, she did not escape criticism. In 1926, The Westminster Gazette wrote that “it must be hoped that no other girl will be so foolish as to imitate her.”

Piercy’s personal life also spilled onto the front pages when she sued a former employer for slander in 1932. She won the case, and he was ordered to pay her 200 pounds (about $18,000 in today’s money).

Piercy faded from the public eye later in life, becoming a footnote in the history of women’s running, until Peter Lovesey, Andy Milroy and other researchers passionate about track and field started to look into her as the 2012 London Olympic Games were approaching. They went on to draft an entry for her in the Oxford Dictionary of National Biography.

Piercy moved frequently after World War II. By 1957 she is believed to have fallen on hard times. Records show someone with her name living in a shelter for women who might otherwise have been homeless.