Safeguarding the City Against Extreme Weather 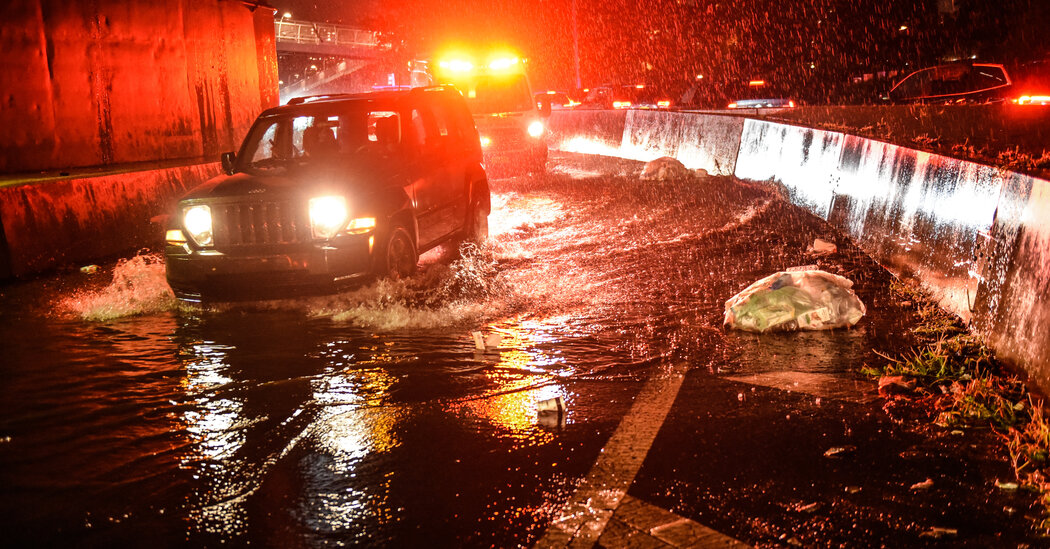 For years, climate scientists and meteorologists have warned that extreme weather was coming, with storms that were more destructive and flooding that was more frequent. We got a bad taste of just how intense that could be when the remnants of Hurricane Ida blasted into the New York area. “It’s not like the rain we used to know,” Mayor Bill de Blasio said after 13 people had died in flooding, most of them trapped in basement apartments.

The storm roared in so fast that it took nearly everyone by surprise, officials and residents alike. I asked my colleague Anne Barnard how prepared New York really is.

What have the recent storms exposed about the city’s infrastructure?

The main thing these storms showed us was that we have to prepare for more frequent downpours. We had a wake-up call from Hurricane Sandy in 2012, but that was different. At the time, experts conveyed the idea that we didn’t just have to prepare against a hurricane coming in from the sea with a big storm surge like Sandy, but also that we’d have to prepare for downpours where more water comes down from the sky than we’re used to in a short time. With rising temperatures, it’s going to happen.

Because of Sandy, a lot of political bandwidth and money went first to working on the really thorny problem of shoring up the coastline. There was also a lot of work done on reducing emissions, to go at the root cause of climate change. But post-Sandy, the public may not have felt as much urgency about the piece about cloudbursts.

And the problem with cloudbursts is that the sewer system can’t cope with a fast deluge?

That’s correct. In May there was the new storm water resiliency plan from City Hall. The Department of Environmental Protection, which takes care of most of the sewers, does millions of dollars of work every year, widening the grates and enlarging the catch basins under the street to slow the rush of the water. There are also plans to create big retention tanks near existing sewage facilities just to hold storm water runoff for a while, until the storm passes and the level goes down again.

What about flood barriers that were talked about after Hurricane Sandy? How many have been built? What about studying how other places guard against flooding?

There needs to be a combination of built barriers and natural solutions like restoring wetlands along the coast, which soak up water, especially floods coming from the sea. In Bangladesh, they have mangroves. With us, it’s marsh grasses.

There have been all kinds of proposals, including building a six-mile wall across the outer New York Harbor that would basically be open except when a huge storm is coming. The less dramatic proposals involve smaller floodgates on waterways like Newtown Creek or the Gowanus Canal. The Army Corps of Engineers was working on this but postponed the project. One reason was experts couldn’t agree on whether this was the best way to protect against Sandy-like storms.

It’s a new week, New York. Enjoy a day of high-70s sunshine and a partly cloudy evening with temps in the mid-60s.

Rapidly approaching vaccinate-or-face-termination deadlines — and court challenges from skeptical health care workers and teachers — made for a confusing weekend.

The state’s deadline for health care workers is midnight Monday. There were roughly 95,000 unvaccinated hospital workers and nursing home employees in the state as of last Wednesday. It was impossible to know how many might have gotten shots since then. Gov. Kathy Hochul said on Saturday that she was considering calling in the National Guard to help cover potential staff shortages.

The city’s mandate for teachers and others who work in schools was put on hold when a federal appeals court granted a temporary injunction on Friday. City officials said they expected the mandate to be upheld eventually.

The Waldorf Astoria Hotel hired Hugh Weir as a trainee in the banquet department in 1958, when he was in his 20s. He rose through the ranks and was the director of events — the senior banquet manager — when he retired in 1994.

He worked there for slightly less than a third of its life.

That was also slightly less than a third of his life, because he and the Waldorf are almost the same age.

The hotel is six months older. It opened 90 years ago this week, on Oct. 1, 1931 — a few months after an even taller icon, the Empire State Building.

The ballrooms and suites where presidents, princes and princesses partied are off limits to all but construction workers at the moment. The Waldorf closed in February 2017 for renovations. It is expected to reopen in 2023 with fewer hotel rooms and new apartments — condominiums starting at $1.8 million.

The Waldorf always had long-term tenants, but they were renters. From the beginning, the Waldorf Towers, reached through an entrance separate from the hotel’s, was home to residents like former President Herbert Hoover, the songwriter Cole Porter and the gossip columnist Elsa Maxwell. She brought in luminaries for parties like the April in Paris Ball. It was neither held in Paris nor in April: It was a social-calendar fixture of the fall.

The Waldorf’s long history also includes eggs Benedict and Waldorf salads, both created there. Andrew Miller — the chief executive of the Dajia US, the new name for the remnants of the Chinese insurer Anbang, which added the Waldorf to its portfolio of properties for $1.95 billion in 2014 — said the Waldorf was perhaps the only hotel that had not only archives but an archivist.

What’s in the archives? Items like Frank Sinatra’s lease. Sinatra paid $1 million a year in the 1970s for a six-room apartment, “which he wanted,” Miller said, “specifically because it had been Cole Porter’s apartment.”

As if the Waldorf does not have enough history, it is celebrating its 90th by looking for more. It is running an oral history project called Waldorf Stories that will preserve the memories people submit. The hotel will choose a winner for a weekend stay when it reopens.

Weir (pictured above, in his Manhattan apartment) has more Waldorf memories than most. He met his wife Chaquet at the Waldorf — she also worked there — but they had their wedding reception in the Persian Room at the Plaza. “I wanted it there because my wife and I used to date there,” he said. Also, he knew the bandleader. And he knew Jerry Kravat, the pianist there at the time. Kravat was later the bandleader at the Waldorf for New Year’s Eve broadcasts after Guy Lombardo’s death in 1977.

When the Waldorf opened, Hoover hailed it with a speech from the White House. And, according to “New York 1930: Architecture and Urbanism Between the Two World Wars,” the owners probably figured no hotel could outdo what they had built. The Waldorf opened as the largest, tallest and most expensive hotel in history.

“Surely,” the three authors wrote, “they remembered that the contract to go ahead with the $42 million project had been signed on the day the stock market crashed, Oct. 29, 1929.”

Someone was singing,
and our hearts,
for one decimal
of time, broke open.

Men stepped in-
to windows,
and women, listening.

For there is
for so few
any pleasure —
for even rich men.
For anyone.

I leaned
on a lamppost,
listening and listening.
I did not dare stir
until the singer finished.