Saints Finally Return Home, to a City That Needed Them 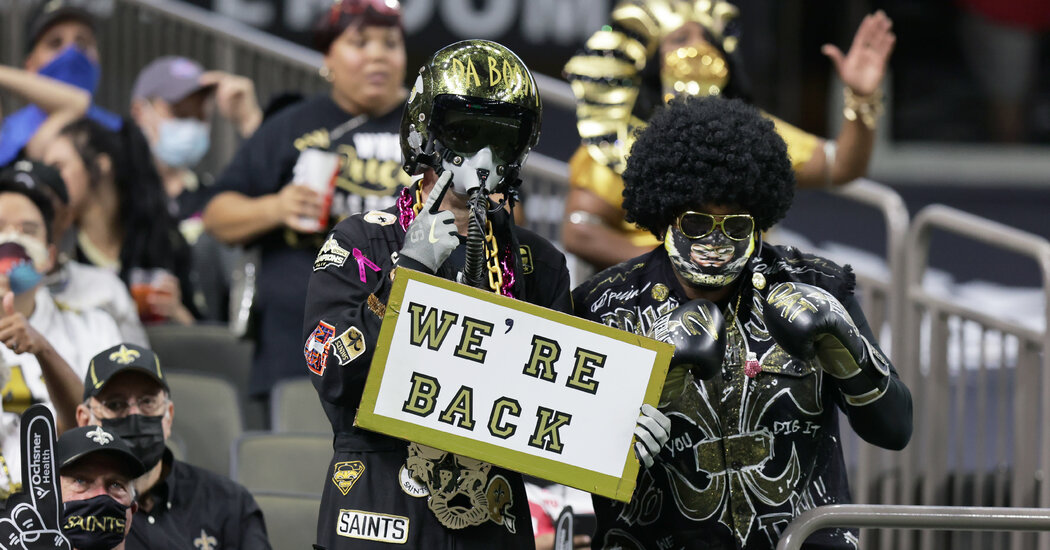 The damage elsewhere transcended mere inconvenience. To Ruffins, Ida evoked Katrina’s little niece, coming back to check on everyone. High winds and floods pummeled areas south and west of New Orleans, like the town of Lafitte, where in the immediate aftermath Owen Belknap, a volunteer with Cajun Navy Relief, patrolled streets in a boat. Belknap grew up with a photo from that first game at the Superdome after Katrina hanging on a wall, and it followed his family across state lines, from home to home, at once a totem and a reminder.

“No matter what storm hits us, we’re still going to be a community that cares about and loves one another and watches Saints together,” Belknap, 22, a student at Louisiana Tech University in Ruston, said by phone on Saturday. “That tradition is comforting and reassuring. It tells people that things, as bad as they might seem, are going to be OK.”

Not too long ago, had one typed “New Orleans Saints” into Google Maps, this is what would have spouted forth: “Religious institution.” The zeal for them is practically ecumenical, with cherished rhythms that endure even after natural disasters. Over FaceTime last week, Moses, 37, shared how after one of her close friends sustained serious damage to her home in Edgard — “everything was completely underwater” — she remarked how she had nowhere to watch the Saints.

“No internet, no home, no cars, and people still were looking for a way to watch the Saints,” Moses said. “Everybody that could just opened their homes.”

It had been 21 months since the Saints last played before a full Superdome crowd, when Minnesota ousted them from the postseason in January 2020. Drew Brees led New Orleans then, but no longer, succeeded by another quarterback who embraces his role in helping the city recover from devastation. Jameis Winston, a son of the Gulf, promised at his first news conference after being named the team’s starter to represent fans well, and he has donated water and thousands of dollars to aid rebuilding efforts.

The Saints play in a stadium that is Louisiana’s most important building, a cultural touchstone that on home football Sundays feels less like a sporting venue than a spiritual revival. The Superdome doubled as a shelter during Katrina and has come to symbolize so many elements of the human condition: suffering, despair, rebirth. Its roof caught fire on Sept. 21 — “At this point, you’re thinking, like, ‘What else?’” Jordan said — and as Ruffins processed the absurdity of it all, he recalled a favorite saying: Only in New Orleans.

Perched atop a stool one morning last week at Kermit’s Tremé Mother-in-Law Lounge, where after Ida he passed out free red beans and rice for almost a week, Ruffins mentioned how his parents used to wear paper bags on their heads at Tulane Stadium. His father, Lloyd, whom he said oversaw the cleaning crew at the Superdome when it opened in 1975, allowed him to run onto the Superdome turf, years before he would play “The Star-Spangled Banner.” After Katrina, his first purchase was a big-screen television, lest he miss his Saints.