Statues Reflecting on Racial Injustice Are Erected in Union Square 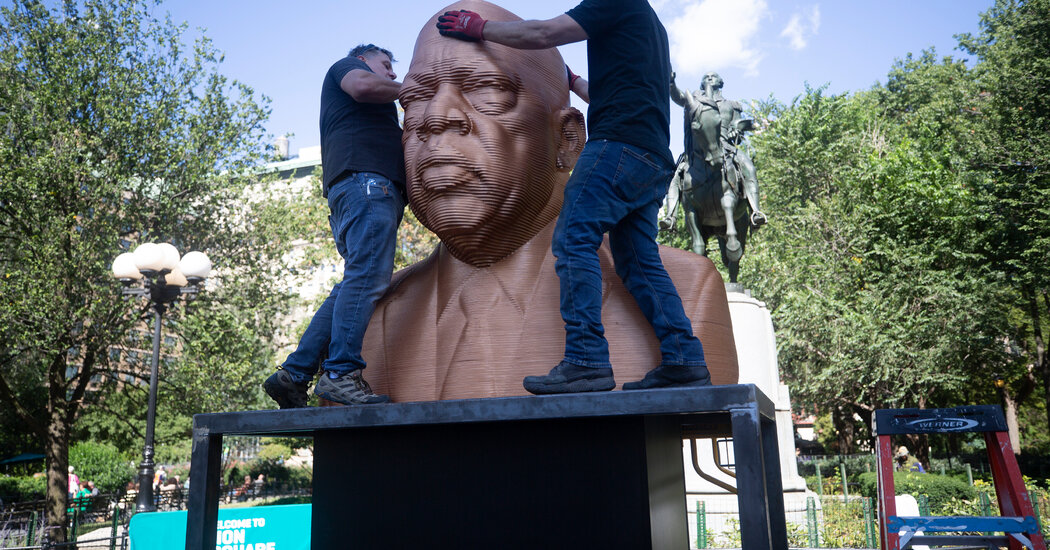 In Union Square on Friday night, Terrence Floyd — a brother of George Floyd, whose murder in May 2020 by a police officer prompted confrontations over police brutality and racial injustice — spoke softly into a microphone.

“These monuments have meaning,” Mr. Floyd said as he stood among large sculptures of his brother, Representative John Lewis, and Breonna Taylor.

The statues were covered in black cloth, and the growing crowd of people held cellphone cameras, ready to capture the moment when Mr. Floyd and others revealed the sculptures, which are nearly six feet tall and made of 200 layers of African mahogany plywood, three-eighths of an inch thick and coated in bronze metallic paint.

In the moment, there were no signs, no pain-filled chants and no gas masks — dramatically different from a little over a year ago, when Union Square was often a central location where nights of protest started or ended. Sometimes dozens of people were arrested. With the sculptures, a site of unrest became a place to reflect.

Chris Carnabuci, 57, the artist who made the sculptures, said that was precisely why he had chosen Union Square to house the installation that he calls “#SeeInjustice,” which will be on display until Oct. 30.

“It has this storied history of — we’ll call it protesting or social gatherings,” Mr. Carnabuci said in an interview. “There was a George Floyd protest at Union Square. Back in the late 1800s, there were protests that went on there. It’s gone on for over 100 years.”

A day before the official presentation, the three sculptures were already catching the attention of passers-by on Thursday afternoon.

Crowds of people shuffled around the sculptures, searching for the perfect angle to take pictures. Strangers talked to each other about the way in which each person was depicted.

Matias Mayol, 49, a tourist visiting from Argentina, said that the artwork had given him goose bumps and that he had had to stop to admire it.

Though he was familiar with Mr. Floyd through the news media in Argentina, he said he had never heard of Ms. Taylor, a Black medical worker who was shot during a botched police raid on her apartment, and was stunned to learn about her story. He was also unfamiliar with Mr. Lewis, a stalwart civil rights activist who was beaten by police officers and sustained a skull fracture during the 1965 “Bloody Sunday” protests as he and hundreds of others tried to march from Selma, Ala., to Montgomery. He died of pancreatic cancer in July 2020.

Mr. Mayol said there was something ethereal about the statues. “I stopped because I like the color, and they look like angels,” he said. “They are up in the sky and looking at us to see changes.”

So Hess, 22, of Los Angeles, said she felt the message would have had more impact if it highlighted all the people harmed by the police, though she understood why the artist had chosen Mr. Floyd and Ms. Taylor.

“It would be better if, like, every single person who died from police violence last year got their own stand and the whole park would be covered,” she said. “But right now it seems like there’s only two people that mattered.”

The killing last year of Mr. Floyd, 46, by Derek Chauvin, a white Minneapolis police officer who was subsequently fired and convicted of murder, inspired Mr. Carnabuci.

Already feeling emotionally drained from the pandemic lockdown, Mr. Carnabuci said he had felt “helpless” while watching the protests unfold. His wife encouraged him to put his sorrow into his art, and he said he had wanted to capture the moment in a meaningful way.

“We actually started thinking about making an exhibition and bringing the pieces around to sort of keep the awareness up,” he said. “And even raise some money for foundations that are geared toward those in need.”

Mr. Carnabuci established Confront Art, an organization that aims to connect artists with social justice causes to create public art, with Andrew Cohen and Lindsay Eshelman, who are producers.

But first, Mr. Carnabuci wanted the blessing of the Floyd family. Terrence Floyd approved. “He never wavered in his support and his love for the project,” Mr. Carnabuci said. “And it also gave us something to work for, which is essentially building the program that would benefit his foundation.”

Mr. Floyd said the meaning behind Confront Art’s name was a major reason he felt comfortable in working with the group on the installation.

Quick response codes will soon be displayed on each sculpture’s base, Mr. Carnabuci said, so people can donate to charities benefiting efforts in the names of the subjects of the statues: We Are Floyd, the Breonna Taylor Foundation and the John and Lillian Miles Lewis Foundation.

For some passers-by, the statues stirred anger and frustration.

Yolanda Burns, 59, of Manhattan said the sculptures were an important reminder that little had changed since the racial unrest and protests of the summer of 2020. “This is 2021 — who expects this to still be going on?” she said. “It seems like it’s going to be a lifelong thing, so I want to make sure that my daughter understood the people whose lives have been sacrificed.”

Union Square is the latest stop for the George Floyd sculpture, which spent a couple of weeks on Flatbush Avenue in Brooklyn over the summer. Less than a week after its unveiling in Brooklyn, it was defaced with the logo of a white supremacist group. Mr. Carnabuci said he had decided to paint it and the other statues so if someone tried to deface them again, they would be easier to restore.

He said he hoped the sculptures would be spared while on display in Union Square.

“I just want people to really look at the sculptures and sort of think within themselves as to how they truly feel about them,” he said. “And if we can just create an environment where we can have discussions about it, I feel like I’ve done my job.”

“I think there’s a way that everybody can find a way to get engaged into making things better,” Mr. Woody said.