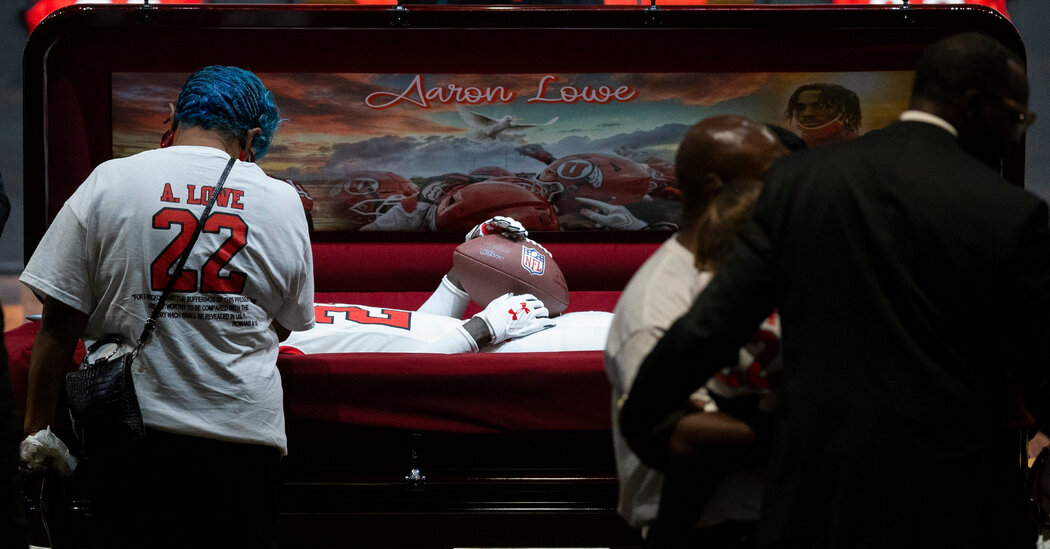 MESQUITE, Texas — Four buses slowed alongside the carpet of yellow grass, which had goal posts at each end and a solitary blocking sled in the middle, and circled to a stop in front of Family Cathedral of Praise.

The buses emptied, and after a few minutes in the warm, autumn sun, the University of Utah football players, coaches and staff members formed two lines and entered the church in pairs. They passed through a foyer and slowly made their way down the center aisle to where Aaron Lowe, their teammate — their brother, really — lay in a coffin, dressed in his white No. 22 uniform and crimson cleats, with a football placed on his belly.

This trip, which began in Salt Lake City on Monday morning and concluded with a return flight the same night, was a familiar one.

In January, many of those who were here had a similarly tearful and tragic journey to North Texas after Ty Jordan — Lowe’s teammate at Utah and at West Mesquite High School — died in what the police have called an accidental, self-inflicted shooting on Christmas night.

“Been down here too many times for the wrong reasons,” said Kiel McDonald, the Utes’ running backs coach.

Lives cut short are almost by definition senseless deaths, but the passing of Jordan and now Lowe — who was shot to death two weeks ago at a house party by an uninvited guest — has left two communities grappling with the cruelty of losing two young men who had survived bleak upbringings and were set up for futures as bright as their incandescent smiles. “They were winning in life,” said Jeff Neill, their high school coach. “Not everybody in their environment gets the chance to do that.”

Jordan, 19, was a squat and speedy running back who was the Pac-12 Conference offensive freshman of the year in last year’s abbreviated season. In the eyes of many, he was a future professional. If Lowe, 21, a defensive back who played mostly special teams, was less likely to be headed to the N.F.L., he seemed destined to go wherever empathy, enthusiasm and an indefatigable work ethic might take him.

“He changed the world, and he was going to do more,” said Melissa Harvey, who came to know Lowe as an administrator at West Mesquite High School, just east of Dallas.

The school, which has a 20,000-seat football stadium, sits in a part of town where poverty is pervasive and trouble is around as many corners as barbecue joints and churches. Lowe had it more difficult than most. As Sharrieff Shah, the cornerbacks coach at Utah, told mourners in a moving, extemporaneous tribute: “A lot of us see these athletes on Saturday, but they don’t know what it takes to become one.”

When Lowe moved into the high school’s district at the end of his freshman year, his grades were in tatters. His two triplet brothers dropped out of high school, his mother was in prison for his last two high school football seasons after being arrested in Louisiana for possession of 30 pounds of marijuana and he spent some of his teenage years bouncing between the homes of coaches, teammates and relatives.

Lowe latched on to a kindred soul in another transplant, Dylan Wright, one of the best high school receivers in the country, who is now a sophomore at the University of Minnesota. The two boys, who learned they were distant cousins, would boil water for a warm bath and turn on the oven in the winter to heat Wright’s grandmother’s home when the electricity was out. Their friendship developed to the point where they finished each other’s sentences.

They also shared a determination to use football to get out.

“We always felt we were different than everybody else,” Wright said. “This is what we’re meant for. We knew football was our key to what we wanted to do in life.”

That was easier for Wright, a sinewy, speedy receiver with sticky fingers. Lowe took longer to find his route. Corey Jordan, an assistant coach who is not related to Ty Jordan, kept telling Lowe he was a Division I defensive back. But Lowe repeatedly resisted, telling the coach he wanted to score touchdowns. But after being stuck in a reserve role as a high school junior, Lowe finally acceded to the switch in the months before his senior season.

Lowe worked relentlessly at learning to play cornerback in the spring before his senior year. In the summer, Corey Jordan and another assistant, Corey McDonald, loaded several boys in a van and took them to college camps all over the state, hoping to showcase them to recruiters. Utah’s coaches were piqued by Lowe after he ran a blistering 40-yard dash at a Texas Southern camp. The more they learned about him, the more they liked him — and Jordan, too, who was a year behind in school.

But then they looked at Lowe’s transcripts.

Morgan Scalley, the Utah defensive coordinator, called Harvey, the assistant principal at West Mesquite, to deliver the bad news: It would be almost impossible for Lowe to qualify academically for the university. She asked what it would take. Scalley’s reply: straight A’s.

Harvey had seen how much effort Lowe had put into summer school a year earlier to catch up on his credits, so she summoned him and Corey Jordan to lay out what it would take. She also emailed his tutors — Miss Brown for science and Miss Honey for English — and told them to let her know if Lowe did not show up. It wasn’t necessary.

“His grades were perfect,” said Harvey, who watched Lowe further unlock his academic curiosity at Utah, where he carried a B average as a communications major and landed on the honor roll in three semesters. One of the rewards was that his mother, Donna Lowe-Stern, was out of prison in time to accompany him on his recruiting visit to Utah.

Salt Lake City seemed the perfect place. Kyle Whittingham, Utah’s head coach, told Lowe’s mother — as he does all his players’ parents — that her son would be family, with a coaching staff full of fathers and a locker room full of brothers. It would be a refuge in every conceivable way — and one in which Lowe blossomed until trouble found him.

On Monday, though, there was only so much comfort to provide. Whittingham announced that the uniform No. 22 — which Lowe wore this season in honor of Jordan, who wore it last season — would be retired. He also said he would make the first contribution to fund a scholarship that would be named in Lowe’s honor, matching the one the Utes established for Jordan.

As Whittingham stood outside the church, Lowe’s mother — dabbing at tears — embraced him and thanked him for everything he had done for her son and, in the last two weeks, for her family. He assured her they would always be family.

A few minutes earlier, the two-hour Baptist homegoing service, filled with laughter, tears, applause, music, singing and a few amens, had concluded with a procession. A man held a football aloft and methodically and theatrically high-stepped his way toward the door. Shah and Scalley, the coaches, and a handful of players followed while carrying the coffin. Earlier this year, Lowe had been among those carrying Jordan for the final time.

As they stepped into the late-afternoon sun, the coffin was eased into the back of a black Cadillac hearse. When it was in place, the players and coaches stepped back and Whittingham was summoned for a final duty. He was asked to close the door.