What We Learned From Week 4 of the N.F.L. Season 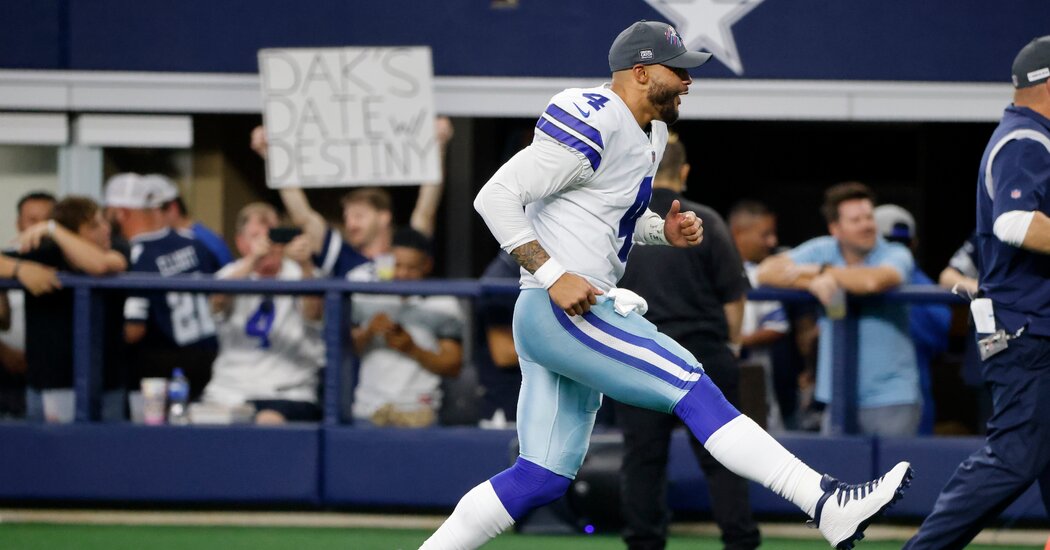 Utterly dismantling a Carolina Panthers defense that has dominated the rest of the N.F.L. this season, Dak Prescott looked like the Super Bowl-caliber quarterback Jerry Jones wondered if he would ever be.

After all, it was Jones who had originally preferred Paxton Lynch and Connor Cook to Prescott in the 2016 draft. The team owner reportedly was apoplectic when the Cowboys were unable to trade into that first round for Lynch. That weekend, Prescott was little more than a consolation prize, and there were even members of the Cowboys’ front office who did not then view Prescott, a Mississippi State project, as a draftable player.

After lengthy negotiations and having had Prescott play on a franchise tag in 2020, Jones finally gave the quarterback a long-term deal before the 2021 season. Prescott appears ready to reward the championship-hungry Jones. The greatest takeaway from Week 4 in the N.F.L.?

Dak Prescott is singularly capable of ending the misery in Dallas.

Against a Carolina defense that has been suffocating offenses — No. 1 in sacks, No. 1 in quarterback hits, No. 2 in points allowed through three weeks — Dallas’s new $160-million-dollar man coolly completed 14 of 22 passes for 188 yards with four touchdowns, no interceptions and a 130.3 passer rating in a convincing 36-28 win.

Granted, the season is young. There’s still time for either Jones or Mike McCarthy to meddle with what’s working, either via a bizarre trade in the middle of the season or some clock mismanagement that would sabotage things. But having Prescott with the ball in his hands every play gives the Cowboys the best shot at ending a 25-year championship drought as they’ve had.

With the score tied, 7-7, at the end of the first quarter, on fourth-and-1 near midfield, the Panthers had all of Dallas’s receivers blanketed. Prescott did not hesitate. He saw a crease and took off for 21 yards to keep the drive alive. Three snaps later, he knifed an 18-yard touchdown to tight end Blake Jarwin.

Panthers quarterback Sam Darnold ran in for his second rushing touchdown to push Carolina ahead, 14-13, Carolina missed a field-goal attempt on its first drive of the third quarter and Prescott struck again.

With Carolina deploying a single-high safety, Prescott again made a decisive move.

Planting his right foot at the Panthers’ 44-yard line, he rainbowed a beauty to Amari Cooper for a touchdown that put Dallas ahead, 20-14. Few defenses in today’s N.F.L. ever cede a one-on-one opportunity along the boundary like that. Prescott read it and pounced on exactly the sort of throw these Cowboys need to consistently make against elite defenses. Further, the Cowboys’ offensive line did an excellent job picking up the exotic blitz.

Dallas never looked back, eventually extending its lead to 36-14.

Even among the league’s try-hards, Prescott’s maniacal work ethic stands out as rare. Since 2016, he has drastically improved every aspect of his game: accuracy, athleticism, arm strength. But Prescott came onto the team as a leader who endeared himself to veterans, rookies and team staffers.

Now confident that it has an elite quarterback, Dallas has started to allow the rest of the team to catch up. In a loss to Tampa Bay’s Tom Brady in the season opener, Prescott threw for 403 yards on 58 attempts. The Cowboys have wisely leaned on the ground game in three wins since, with both Ezekiel Elliott and Tony Pollard pounding away, as defensive coordinator Dan Quinn overhauls a historically bad defense. To prevent Prescott from having to throw the ball 50-plus times a game, Elliott must continue delivering as he did on Sunday against Carolina. Midway through the third quarter, he hesitated at the line, let a hole develop and hit a top-end speed that Dallas hasn’t seen in two years for a 47-yard carry.

Jerry Jones may never have really wanted Prescott, but Prescott is proving that he’s capable of giving Jones what he has always been after.

Minnesota’s third loss was its worst.

Either way, the Minnesota Vikings’ 14-7 loss at home to the Cleveland Browns was as demoralizing as it gets for an offense that could do no wrong in September. After going without an interception against three subpar secondaries, Cousins could have proven that he could perform against a legitimately great defense. Instead, he turned back into a pumpkin.

That has been the rap on Cousins over his career: Against poor defenses, he’ll throw for 300-plus yards and three touchdowns with ease. But add a stingy pass rush and sprinkle on higher stakes, and be ready to be underwhelmed.

Heading into this season, Cousins was 7-35 against teams that finished the season with a winning record.

The Browns finished with 10 hits on Cousins, four of which were compliments of Myles Garrett. But this was a 4-point game for three quarters and one big play could have busted things open. That play never developed. After Cleveland kicker Chase McLaughlin connected for a 53-yard field goal to put the Browns up, 14-7, with six minutes remaining, Cousins’s deep shot on the next possession was easily intercepted by cornerback Greedy Williams. The Vikings got the ball back twice more, including for a final drive with a minute left, but could not manage a score.

Cousins gets the Detroit Lions next, but that will most likely serve as only a couple of pills of Advil with the Vikings then facing six legitimate contenders in a row.

Washington 34, Falcons 30: One of the biggest shocks of this season is how bad the Washington Football Team’s defense has performed. Of course, it didn’t matter against an equally porous Falcons defense. Running back J.D. McKissic supplied the heroics by going airborne at the goal line with 33 seconds left.

Bears 24, Lions 14: Whenever hysteria reaches its fever pitch at Halas Hall, it seems like the Bears always have a get-right game on the schedule. The rebuilding Lions were the perfect medicine, and running back David Montgomery (106 yards, two touchdowns) continued to bludgeon linebackers as one of the best players we don’t talk nearly enough about.

Colts 27, Dolphins 17: Jonathan Taylor was a force on the ground (103 yards, touchdown), Carson Wentz was efficient enough on those two bad ankles (24-of-32 passing with two touchdowns) for Indianapolis to get a much-needed win after three emotionally taxing losses.

Giants 27, Saints 21 (OT): Lost in the Giants madness this season is the fact that Daniel Jones has taken an obvious step forward. He’s not committing the backbreaking mistakes of 2020 and, on Sunday, he started taking more shots downfield, finishing with 402 yards and two touchdowns.

Chiefs 42, Eagles 30: Andy Reid surely knows he needs to clean up his rickety defense. Kansas City again gave up yards and points in chunks. But as long as Patrick Mahomes and Tyreek Hill exist, this Chiefs offense can outscore any team in the league. On 12 targets, Hill caught 11 passes for 186 yards and three touchdowns.

Jets 27, Titans 24 (OT): OK, so Titans receivers Julio Jones and A.J. Brown were both sidelined. Jets Coach Robert Saleh still got his first N.F.L. win behind a defense that hit Ryan Tannehill 14 times and a rookie quarterback, Zach Wilson, who played with the swagger the team has been missing.