What’s Next for SoHo? 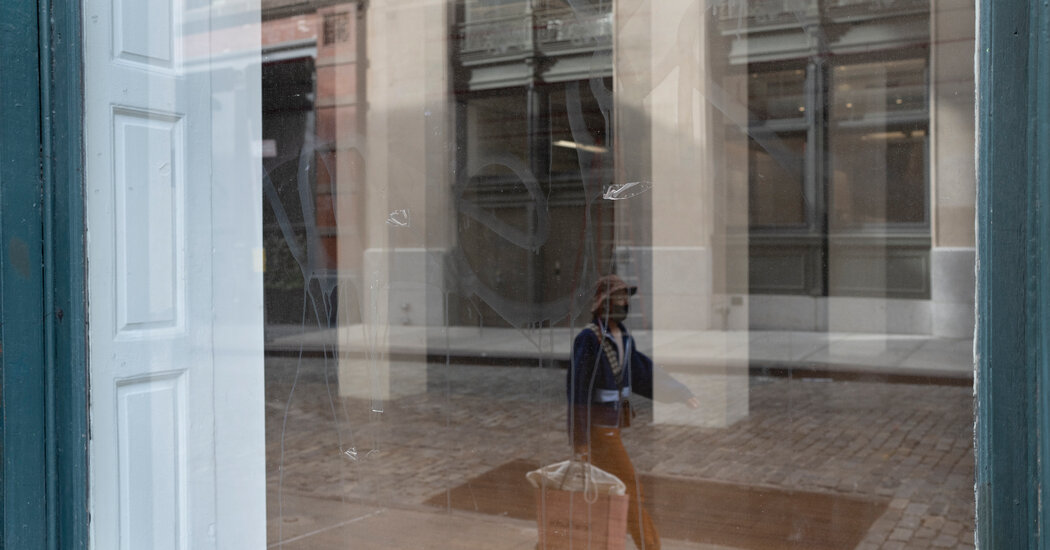 It’s Wednesday. We’ll look at SoHo as an indicator of economic damage to retailing and real estate in the pandemic. We’ll also splash around in a new pool in the Bronx.

The classic 1973 book “A Random Walk Down Wall Street” postulated that you can’t predict what the stock market will do tomorrow based on what it did yesterday. William Easterly, an economics professor at New York University, began taking random walks down a different Manhattan street in 2012 and postulated that you can’t predict how a neighborhood will change based on how it changed last week or last year.

The block — Greene Street between Prince and Houston Streets in SoHo — has had many lives: In the 1880s it was a “brothel block,” then a garment factory block, then an art gallery block frequented by the likes of Andy Warhol and Jasper Johns.

Then the pandemic swept in, and Easterly worried that the block was nose-diving as he watched retailers move out.

My colleague Matthew Haag looked at the SoHo neighborhood more broadly and wrote the pandemic had left it the hardest-hit commercial district in the hardest-hit city, at least in the United States.

[SoHo Catered to Free-Spending Tourists. What Happens Without Them?]

“For Lease” signs hang in one storefront after another now that more than 40 stores have closed, among them outposts of brands like Frye, Missoni and Victoria’s Secret. Stratospheric rent? Not on new leases. The current asking price for a SoHo storefront is $274 a square foot, down from $350 before the pandemic, according to the real estate services firm Cushman and Wakefield.

And no Manhattan neighborhood saw its offices empty out faster in the pandemic.

The stores were already facing challenges, given the erosion of brick-and-mortar retailing. Although SoHo and neighboring NoHo were second only to Fifth Avenue in total retail revenue in 2016, according to a report by HR & A Advisors, SoHo retailers had become dependent on tourists.

Pandemic travel restrictions have kept them away, and now employees far outnumber shoppers in most boutiques. This succinct assessment came from Carlos Garcia, the manager of the locally owned clothing store Mystique Boutique, on Broadway: “Without tourists, it’s dead down here.”

Easterly’s impressions from last year served as a postscript to a website and a 2016 academic paper about Greene Street that he wrote with two colleagues. Easterly has had reason to go there regularly, walking his dog Sashi, a Tibetan terrier. Fortunately for them, Greene Street is close to home: It dead-ends across West Houston Street from Easterly’s apartment.

“In the spring of 2020, there was an apocalyptic feeling when I was walking Sashi on the block,” he said. “The city was deserted, the block was deserted, the stores were shut.” After the Black Lives Matter protests, some stores covered their windows with plywood.

What played out in the economic free-fall of the pandemic was “a reminder that success can be very fragile and things can go down as well as up,” he said. “But things look a lot better than they did in that moment.”

Property owners and neighborhood business leaders agree that there is reason for optimism. Some new retailers have moved in, as have start-ups that have taken office space, though often for less money on shorter leases than were common before the pandemic.

“Retail rents had gotten too high,” said Jeffrey Gural, the chairman of GFP Real Estate, which owns several SoHo buildings. “In some cases, they were taking the space for marketing, knowing they weren’t going to be profitable stores. Those days are over.”

It’s a partly sunny day with temps in the low 70s. At night, it’s most cloudy and temps will drop to the low 60s.

Mayor Bill de Blasio is moving toward a possible campaign for governor. It’s the clearest sign yet of what he might do after he leaves City Hall at the end of the year. De Blasio, who became a polarizing figure during his two terms, has begun telling people privately that he intends to move forward with a run, sounding out trusted former aides about working on a potential campaign. He has also spoken with labor leaders and prospective donors.

But Peter Ragone, the adviser who may be closest to Mr. de Blasio’s deliberations, insisted that the mayor “hasn’t made any final decisions at all about what he’s doing next.” And the chairman of the New York State Democratic Party has endorsed Gov. Kathy Hochul, contending that a multicandidate primary in 2022 could damage the party.

Alonzo de Castro wanted to be the first person in a new pool in the northeast Bronx, and he was. Well, one of the first two. Shirley Fearon, who had also campaigned for the pool for years, was the other.

“I felt exhilarated, just the fact that I could be in the pool,” he said.

The pool is one of two in the new Northeast Bronx Y.M.CA., run by the Y.M.C.A. of Greater New York, which spent $25 million on construction — about 40 percent of the total cost for the building and the pool. The rest came from the city and the state, said Sharon Greenberger, the president and chief executive of the Y.M.C.A.

De Castro said he had the brainstorm at a breakfast for leaders in the 47th Precinct in 2009. “Ruben Diaz was about to become borough president,” he said.

“Carl Heastie was there,” he continued, referring to a state assemblyman who would be elected speaker in 2015. “I looked around and said, ‘For years, we’ve wanted a community center.’ I went over to Shirley Fearon, who at that time was the president of the N.A.A.C.P., and said, ‘I think we’ve got the political power to get things done.’” They soon formed the Northeast Bronx Community and Clergy Coalition, with 16 neighborhood organizations as members.

De Castro said they turned to the Y.M.C.A. to operate the center after at least one other organization turned them down. Greenberger said the Y.M.C.A. had “a commitment to expand in the Bronx.” It had only one branch in the borough, she said, “and in some ways, it was the borough that most needed the services and programs we could provide.”

It is the Y’s second location in the Bronx. The first was in the Castle Hill section; another is being built in the South Bronx.

The northeast Bronx center is an environmentally friendly building with an “agricultural roof.” Vegetables grown there can be taken downstairs to a kitchen, where there will be sessions on nutrition and the importance of healthy eating. There’s also a fitness studio in the 50,000-square-foot center.

But the two pools — a lap pool with four lanes, and a family pool — were the immediate draw.

“I’m going to have to jump in the pool,” Greenberger said, “because everybody else has.”

Early on a summer Saturday, my husband and I boarded a downtown No. 2 weighed down with beach paraphernalia. It was 6:30 a.m., and the train car was almost deserted.

Across from us sat an older man holding a tall fishing rod.

After we had been riding a short time, I realized that someone was singing “But Not for Me.” I looked across the car and saw that it was the fisherman. When he got to the end of the song, he sang it again. And then he began to whistle it.