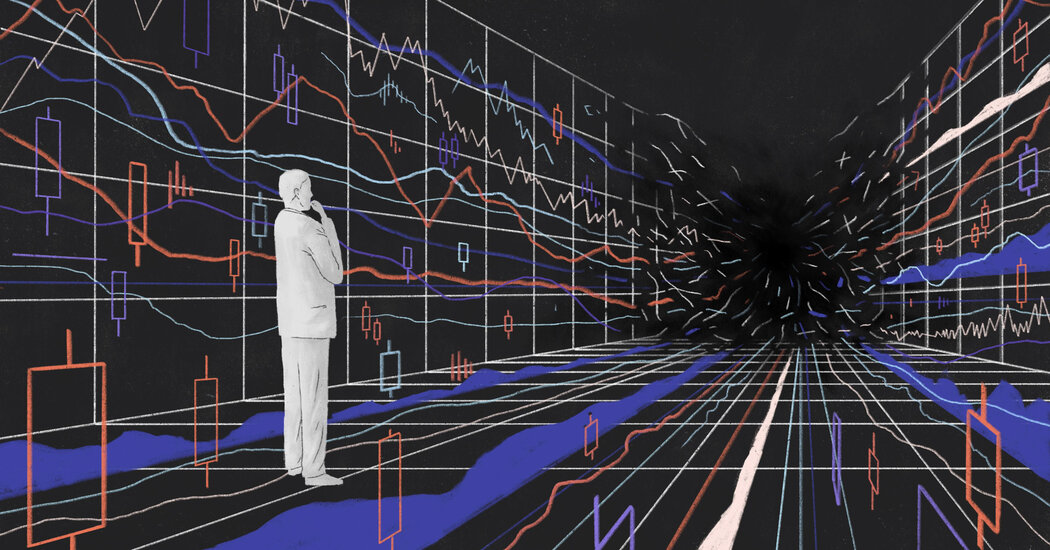 This year has been unsettling for Chinese business. The ruling Communist Party has gone after the private sector industry by industry. The stock markets have taken a huge hit. The country’s biggest property developer is on the verge of collapse.

But for some of the biggest names on Wall Street, China’s economic prospects look rosier than ever.

BlackRock, the world’s biggest asset manager, urged investors to increase their exposure to China by as much as three times.

“Is China investable?” asked J.P. Morgan, before answering, “We think so.” Goldman Sachs says “yes,” too.

Their bullishness in the face of growing uncertainty has puzzled China experts and drawn criticism from a wide political spectrum, from George Soros, the progressive investor, to congressional Republicans. Mr. Soros has called BlackRock’s stance a “tragic mistake” that’s “likely to lose money” for its clients and would “damage the national security interests of the U.S. and other democracies.”

But Wall Street sees opportunity. Even while Beijing tightens its grip over business and the economy, it is giving global investment firms greater opportunities to serve Chinese companies and investors.

At the height of a market sell-off in late July, the deputy chairman of China’s securities regulator, Fang Xinghai, summoned executives of BlackRock, Goldman Sachs and other firms to a meeting, trying to alleviate investor nervousness over Beijing’s crackdowns, according to a memo I reviewed.

Some 20 days later, regulators approved BlackRock’s application to offer mutual funds in China. Around the same time, a BlackRock executive told The Financial Times that China was underrepresented in global investors’ portfolios and in global benchmarks. The firm recommended that investors boost their allocations by two to three times.

BlackRock said in a statement that its global clients “can benefit from portfolio diversification that includes more deliberate asset allocation to China,” adding that Wall Street’s expansion in China is consistent with American government policy goals.

Wall Street now stands as an increasingly lonely voice arguing for more engagement with China. Both American political parties are calling for a tougher stance. Positions have hardened in other countries, too. The broad business world has become more ambivalent: It still sees China has a huge market, but issues like trade, intellectual property and the government’s support of homegrown businesses have complicated their traditional support.

Wall Street might be right to be bullish. China has defied bearish predictions in the past. Despite the party’s authoritarian rule in other matters, it has long brought a touch of laissez faire to the economy, helping growth.

But Xi Jinping, China’s top leader, is ushering the country into a more uncertain era. The party’s rule is tighter and more authoritarian than before. It has not abandoned market principles broadly because it needs economic growth to sustain its legitimacy, but it is tinkering with tighter controls. The long-term impact is far from clear.

This summer, China’s private sector suffered its harshest beating by the Communist Party in decades. With just a few abrupt orders, Beijing kneecapped the internet industry, sharply curtailed the after-school tutoring businesses and drove some property developers to the brink of default.

Didi, China’s dominant ride-hailing company, was a Wall Street darling when it went public in New York in late June, raising more than $4 billion. Its share price has fallen by nearly half after the Chinese government moved to limit its business two days after its listing, leaving many investors — including American funds — in limbo.

“I don’t think we can use spreadsheet-type thinking to take a view on China in the 2020s and beyond,” said George Magnus, a China researcher at Oxford University. The country is going through “a sharp leftward lurch in politics,” he said, “which is creating a deep contradiction between the craving for political control and the desire for good economic and innovation outcomes.”

Some of Wall Street’s biggest names disagree. Ray Dalio, founder of the hedge fund Bridgewater, wrote in late July that people in the West should not interpret Beijing’s crackdowns as “the Communist Party leaders showing their true anticapitalist stripes.” Instead, he wrote, the party believed those moves were “better for the country even if the shareholders don’t like it.”

The relationship has been good to Bridgewater so far. Mr. Dalio’s firm has raised billions of dollars from Chinese clients such as the China Investment Corporation, the sovereign wealth fund, and State Administration of Foreign Exchange, which manages the country’s currency reserves. (Bridgewater declined to comment.)

This is a balance that business has played with China for a long time: Say nice things to Beijing, lobby back home on China’s behalf, then ask for access to markets and capital.

Goldman Sachs became the first foreign bank to seek full ownership of a securities business in China in December. BlackRock, which describes China as an “undiscovered” market, hired a former regulator to head its China business. So many global financial firms are expanding in the country that there’s a talent war.

The Wall Street firms argue that, despite regulatory risks and slowing growth, China is too big to ignore and that its stocks are too undervalued to pass up.

Many investors have listened. U.S. mutual funds and exchange-traded funds investing primarily in China held $43 billion in net assets at the end of August, up 43 percent, or $13 billion, from a year earlier, according to Morningstar.

A lot of companies and investors have made a lot of money over the years from China. And despite the frosty talk between the two sides, they still share extensive business ties. China makes iPhones and buys iPhones. Same with Chevrolets. China’s economic growth, while slowing, is still stronger than in most places. That won’t change overnight.

But even as Wall Street cheers on China, the balance between engaging with Beijing and confronting Beijing has fallen out of whack. And Americans lawmakers are starting to scrutinize those ties. Elected representatives from both the Democratic and Republican Parties have expressed concerns about American funds investing in China. A U.S. government retirement fund halted plans to invest in Chinese stocks last year after growing criticism that the move could work against national security goals.

Matthew Pottinger, a deputy national security adviser under former President Donald J. Trump, warned recently in Foreign Affairs that these institutions “cling to self-destructive habits acquired through decades of ‘engagement,’ an approach to China that led Washington to prioritize economic cooperation and trade above all else.”

Compared with Wall Street’s confidence, China’s business community is jittery about what comes next. The wealthiest people are pledging to spend millions, sometimes billions, of dollars on charities and other projects to stay aligned with Mr. Xi’s goal of “common prosperity.”

Access to senior Chinese policymakers doesn’t work its magic as much as before, either. Stephen Schwarzman, head of the private equity giant Blackstone, has long cultivated relationships with the Chinese leadership. He is tight with Liu He, the country’s economic czar. Still, his firm was forced to call off a $3 billion deal to buy Soho China, a property developer, in September because they failed to get regulatory approval. Blackstone declined to comment.

The Wall Street firms are apparently betting that China’s past successes will continue. They have a long track record on their side, but they would do well to remember what they constantly tell their customers: Past performance isn’t necessarily indicative of future results.